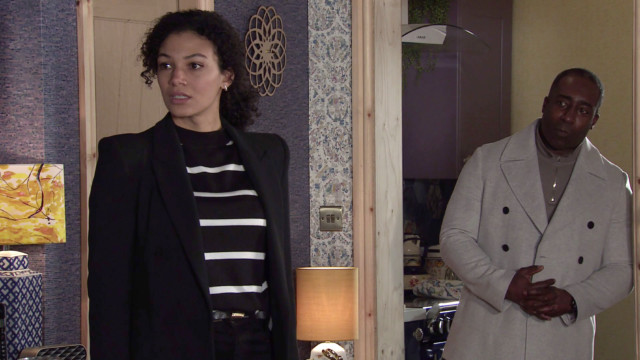 GRACE and Michael’s world comes crashing down as their newborn baby girl struggles to breathe next week in Coronation Street – and is put on a ventilator.

Grace will give birth as Ronnie drops the bombshell on Ed that he had a fling with Aggie years ago – and could be Michael’s father.

Aggie was unsettled when her brother in law arrived on the cobbles last month.

And next week, the plot will thicken as Ronnie’s estranged wife arrives on the scene and demands to know why he’s been ignoring her calls.

Kat accuses Ronnie of running off with Aggie and when she refuses to back down, Ronnie explains he’s on the cobbles to find out if Michael is really his son. Grace is rushed to hospital after feeling a contraction Michael is thrilled when Grace gives birth to a baby girl

Ed arrives and demands to know who Kat is, but she’s stung when Ronnie introduces her as a business partner.

Later, Kat warns Ronnie he might destroy his family with his revelation.

Meanwhile, Grace is rushed to hospital after feeling a contraction.

While Grace gives birth, Ed asks Ronnie why he’s so on edge and he admits he had a relationship with Aggie before Ed met her. As Ed tries to process what Ronnie has said, Michael announces that Grace has given birth to a baby girl.

Later in the week, Ronnie calls round with gifts for the baby but an angry Ed orders him to stay away.

Later, Michael tells Ed they’ve had to put the baby back on a ventilator and Ronnie offers to buy Michael a car as he’ll be driving back and forth from the hospital.

Ed is furious but bites his tongue for the sake of Michael and the baby.

Will Michael discover that Ronnie could be his dad?

If so, how will he react?

Ant and Dec return to Britain’s Got Talent with a bang performing huge musical...