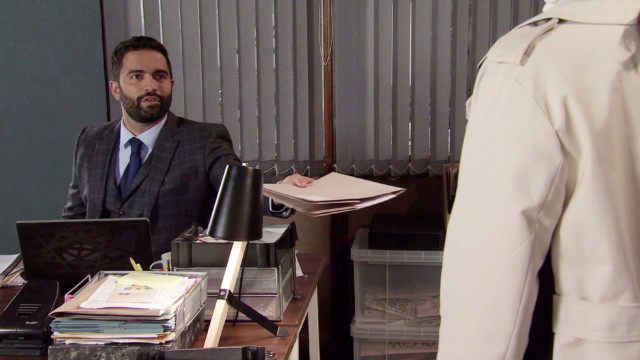 IMRAN Habeen is backed further into a corner by his ex-wife Sabeen next week in Coronation Street.

The lawyer – who is played by Charlie De Melo – came face-to-face with Sabeen when she was revealed as a barrister on Corey Brent’s defence team.

After Kelly Neelan was wrongfully found guilty of killing Seb Franklin during intense trial scenes, a defeated Imran took Sabeen up on her offer of staying at hers.

And now it seems something may have happened between the pair as Sabeen blackmails Imran over a secret in upcoming scenes.

Viewers will see Toyah give Imran the green light to help Sabeen with her big case.

Imran’s heart sinks when Sabeen says she needs him to use his local contacts to trace Sharon.

Following Sabeen’s orders, Imran grills Simon who hands over the phone which Harvey gave him to carry out drugs drops.

When Toyah suggests that they look into fostering another child, Imran agrees.

Corrie viewers were furious with Imran after he betrayed Toyah by visiting Sabeen’s home behind her back.

When Toyah questioned where he’d been, Imran pretended he’d got drunk in his office and fallen asleep.

The big question is: has Imran cheated on Toyah or is he hiding another secret? Imran agrees to look into fostering another child with Toyah

Rishi Sunak’s Budget will be an expensive and painful sandwich of giveaways and tax...

I’m A Celeb’s next evictee ‘revealed’ as another star leaves tonight in mass clearout...