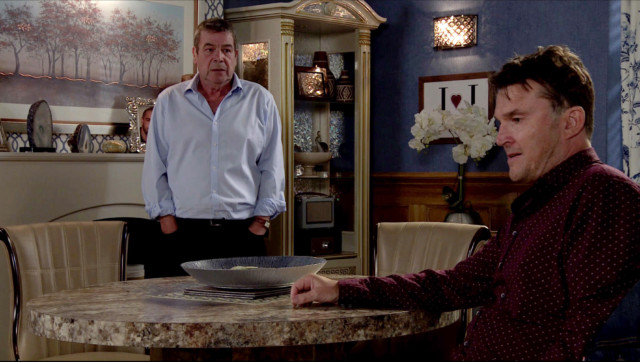 The landlord was aghast when Scott rocked up at the pub back in April to rent out the spare room – and fled to France with Jenny.

And when Jenny returned to the cobbles in July there was still no sign of Johnny.

Next week’s episodes of Corrie will see Johnny make a shock return from France.

Jenny wastes little time in berating him for leaving her to run the pub all by herself. Johnny and Scott have a secret dark connection

When Johnny avoids her questions, Jenny grows suspicious that there’s something he’s not telling her.

Later in the week, Johnny tries to win Jenny round by telling her that he just needed some time alone – but that it won’t happen again.

When Scott tells Johnny it’s about time they had a serious conversation, Johnny ushers him into the backroom of the pub.

Coronation Street fans are certain that Scott will turn out to be Carla’s biological father after it emerged that Scott worked with Johnny back in the 1970s and that he knew her mum.

Viewers were convinced further when Scott was seen with bloodied and bruised knuckles after Carla’s tormentors, Jordan and Chelsey, were brutally attacked.

If Johnny is Carla’s biological father, will he demand for the truth to come out?

Actor Tom Emberton – who plays Scott – previously told Metro.co.uk: “[Scott] is a very charismatic guy, he’s got a bit of a swagger and he is very confident.

“It becomes obvious pretty much straight away, as soon as Johnny clocks him, that there is a past there. It takes quite a lot to frighten Johnny, he’s no pushover and he is quite a strong guy.”

He continued: “So viewers will know from the outset that this outwardly charming, funny man with his witty lines and his confidence is not all that he seems.”

Dominic Raab ‘faces axe’ after up to 9,000 people left stranded in Afghanistan