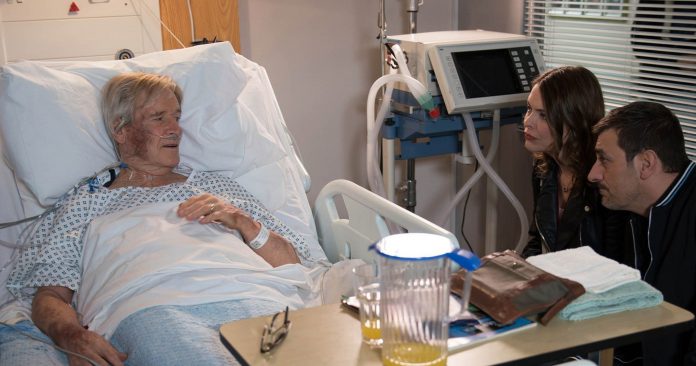 KEN Barlows health will take a turn for the worse in Coronation Street as hes rushed to hospital with a potentially fatal infection in upcoming episodes.

The grandfather – played by Corrie legend William Roache – will shock his family in an upcoming episode as the aftermath of Sineads death takes its toll and hes diagnosed with life-threatening pneumonia.

Coronation Street legend Ken is admitted to hospital with pneumonia but will it be fatal?

Corrie fans will know that its been a tough couple of years for Ken following his discovery of the truth about pregnant Sineads cancer diagnosis.

He then struggled to keep the diagnosis a secret after a terrified Sinead insisted that his son Daniel Osbourne was kept in the dark so as not to break his heart.

And viewers were in tears as Sinead lost her battle with cervical cancer in October after being diagnosed for the second time.

Viewers will know that the tragedy of Sineads death and the dramatic aftermath are taking a toll on Ken.

Ken panicked as Daniel seemed to understandably lose the plot and flee to the Highlands following his wife’s death, refusing to return for her funeral.

A highly strung Ken and partner Claudia Colby set off to track him down and bring him home but returned to the cobbles without the single dad.

Daniel then encountered his half brother, Peter Barlow, who told the grieving husband that Ken was worse for wear and urged him to return from Scotland for the sake of his family.

And in upcoming episodes things are only set to worsen as Kens health will unfortunately take a turn for the worse.

In the upcoming episodes a worried Peter will tell Adam that their Dad Ken is in hospital and has been diagnosed with potentially fatal pneumonia.

Could this be the end of the road for Ken or will his family be saved from further heartbreak?

Find out by tuning into Corrie next week.

Who is Emmanuel Macron?