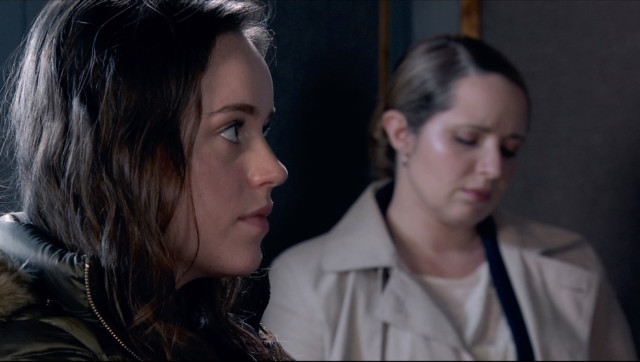 RAY Crosby drugs Abi Franklin next week in Coronation Street after she records him bribing the planning official and tries to blackmail him.

Abi will tell Ray to admit to attacking Faye in exchange for deleting the recording in the ITV soap.

Faye reports Ray to the police and confesses to attacking Adam

Viewers will see Faye hand herself into the police next week after confiding in Craig about how Ray tried to rape her – and how she attacked Adam thinking he was Ray.

Debbie is stunned when Ray is arrested at the Bistro on suspicion of attempted rape.

But later in the week, Abi, Alya and Faye see Ray leaving the bistro and are gutted to realise he’s been released.

In an attempt to help Faye’s case, Alya reports Ray to the police for luring her to a hotel bedroom to try and have sex with her. Meanwhile, Abi arrives at Ray’s hotel hoping to find something to use against him.

But when he arrives back with Susan, the Chairperson of the planning committee he bribed, Abi dives behind the bar and records them discussing their crimes.

Debbie tells Ray that he should sign over Hexappoint to her, but he insists he’s got everything under control. Debbie finds Abi sprawled on the floor in the bistro

It turns out he hasn’t, however, when Abi appears and shows him the footage on her phone, telling him that she’ll bury it if he admits to the attempted rape of Faye – and that if not she’ll go public with it.

Later in the week, Ray meets up with Abi in the Rovers’ back yard and tells her he’ll confess to attacking Faye as long as she deletes the video footage.

But as Abi suddenly feels dizzy and faints, Ray grabs her phone. Later, Debbie bursts into the bistro to confront Ray about the video Abi sent her, but she’s stunned to see Abi lying on the floor.

Debbie tries to ring an ambulance, but Ray swipes her phone out of her hand and tells her to leave it to him.

Will Debbie stand up for Abi?

Corrie bosses have hinted that Debbie might be the one to stop Ray after she turns against him in the coming weeks when she realises Abi is in grave danger.

Speaking to HOAR Online, soap boss Ian MacLeod recently revealed: “He [Ray] also becomes more desperate to get this building project over the line, because we discover he’s got quite a lot riding on it. If it goes wrong, it could be curtains for him, very literally.

“That brings Ray into conflict with his old nemesis Abi. There’s some fantastic stuff there where Abi takes Ray on and her life is in a fair amount of jeopardy.”

He went on to add: “That, in turn, draws in Kevin and Debbie – as they end up in Ray’s crosshairs as well.

“There’s a really brilliant power struggle between Debbie and Ray, which has twists and turns – with literal life-or-death jeopardy. It’s all really exciting.

Did you miss our previous article…
https://www.hellofaread.com/soap-opera/emmerdales-ben-freeman-joins-eastenders-as-mystery-man-connected-to-chelsea-fox/

‘Playful’ Prince Harry ‘has vanished’ as he poses ‘awkwardly’ with Meghan Markle at Invictus...

Who was Michael Shea and who plays him in The Crown?