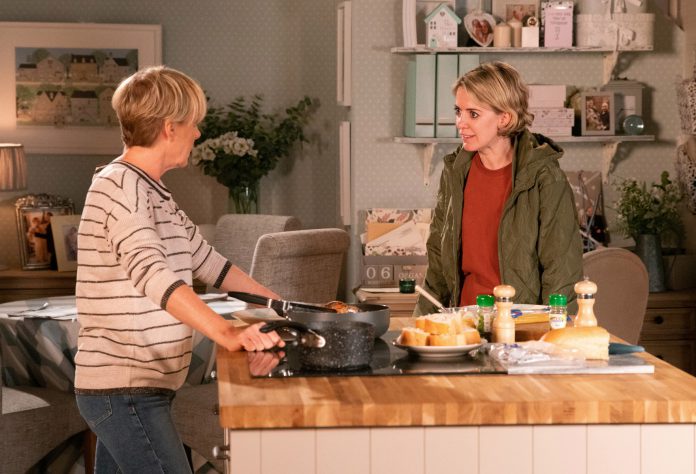 ONE of Coronation Streets most-loved friendships will be on the rocks next week as Sally Metcalfe turns on Abi Franklin.

Fractures begin to show when Sally whos played by cobbles legend Sally Dynevor in the ITV soap is unimpressed to find Abi getting drunk with ex-husband Kevin Webster instead of revising for her Maths GCSE.

The next day, a cross Sally prods Abi (Sally Carmen) into action, reminding her that shes got an exam this morning.

Later, an upbeat Abi tells Sally and Kev that she thinks she aced her exam as she was too hungover to be nervous.

But Abis mood is soon turned sour when Sally makes a dig at her, saying shes only been interested in Kevin since he came into money.

A furious Abi then throws a bowl of spaghetti bolognaise over Sally before storming out. And how will Kevin react to Sals accusations?

Luckily, the women soon make it up and Sally apologises to Abi, admitting shes overprotective when it comes to Kev.

Abi agrees to move back in with Sally and assures her that she has no designs on Kevin theyre just mates.

Abi then breaks the news to Kevin that she and Sally have made amends and she wont be moving out after all.

Kevin tries hard to mask his disappointment. Is he hoping to be more than just friends with Abi?

Kev recently came into several thousand pounds when his Aunt Vi passed away.

Sally and Abi bonded last year when the former mayor of Weatherfield was wrongly imprisoned for fraud.

Abi was also behind bars after taking the blame for son Seb who trashed Tracy Barlows flower shop.

When Sally ran into trouble with the prison bully, Abi stood up for her, cementing a firm friendship between them.

Who was at Rita Ora’s party at Casa Cruz?