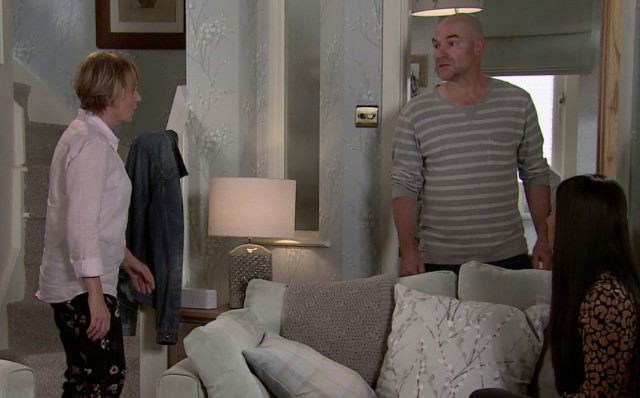 TIM Metcalfe desperately searches for missing mum Elaine as he and Sally steal Geoff’s laptop and recover the footage of his final argument with Yasmeen.

Fans of the ITV soap are convinced Geoff has murdered Elaine after a furious showdown between the exes ended with Geoff destroying her phone.

Elaine was nowhere to be seen as Geoff destroyed her SIM card and tossed it down a nearby alley drain.

Viewers were gutted when Tim rejected Elaine during her short stint on the cobbles when she tried to convince him she was his mum – and that Geoff was a monster.

Fans know that Geoff has brainwashed his son into thinking that his next wife Tess was his birth mother – and that Elaine is lying. But next week’s episodes of Coronation Street will see Tim finally turn against his dad.

The upcoming scenes will see Sally tell Cathy about the CCTV camera and incriminating footage.

When Cathy says any footage will be on Geoff’s laptop, Sally hatches a plan and tells Faye she wants to get a book for Yasmeen and asks for the keys.

After stealing Geoff’s laptop, Sally enlists the help of Faye and Tim to download the deleted camera app and CCTV footage. Later, the police arrive and tell Geoff that new evidence has appeared – and that they have some questions for him.

Have Sally and Tim recovered the footage of his final argument with Yasmeen?

Having finally realised that Sally was right about Geoff all along, Tim worries for Elaine’s wellbeing and decides to track her down.

Later, Tim returns from bolton and tells Sally, Alya and Imran that there was no sign of Elaine.

He also says that, judging by the huge pile of post on her mat, she hasn’t been there for a while.

Has Geoff murdered Elaine after all?

Boris Johnson ‘puzzled’ by Macron’s demands to punish UK over Brexit but insists they...