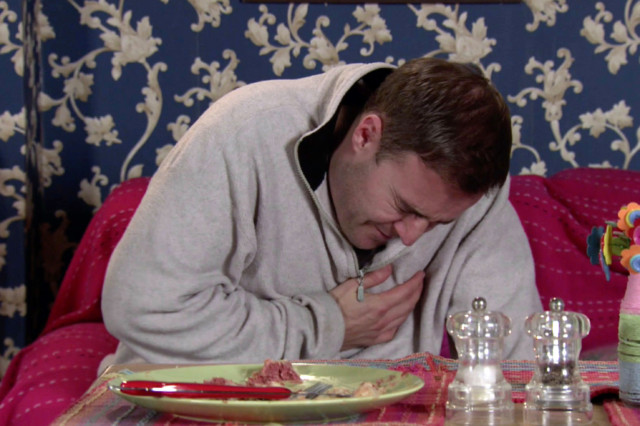 TYRONE Dobbs collapses in agony and is forced into a health kick next week in Coronation Street – but Fiz refuses to support him.

The mechanic – who is played by Alan Halsall in the ITV soap – leaves the furniture shop unattended tonight (February 12) after growing distracted by Alina – and returns to find it’s been robbed.

And next week viewers will see Fiz return from meeting Gary next week and break the news that he’s insisting they find the money to cover the cost of stolen stock.

But as they argue about the missing furniture, Tyrone grips his chest and falls to the floor.

Fiz screams at Evelyn to call an ambulance.

Later, Fiz and Evelyn nervously wait in A&E, but Tyrone eventually emerges with his tail between his legs and admits it was nothing more than heartburn.

Fiz is relieved but Evelyn is furious he’s wasted her day. Fiz is left fearing the worst for Tyrone Fiz is relieved when Tyrone admits it was only heartburn

Later in the week, Tyrone tells Fiz he’s booked some lessons in a bid to improve his health but Fiz is annoyed he’s wasted money and has another go at him.

Tyrone later sets off for yoga but fails to get Fiz’s support.

Will Tyrone turn his attention elsewhere instead? Tyrone starts a health kick but Fiz refuses to support him

Fans are convinced that the soap is sowing the seeds for an affair between Tyrone and Alina in the coming weeks.

Viewers grew certain that Tyrone would leave Fiz heartbroken after he ran away when Alina burst in on him wearing nothing but a towel.

To add to viewers’ suspicions, Tyrone jumped at the chance to head for a coffee with Alina this week, leaving the furniture shop unattended in the process.

Will Tyrone fall for Alina and break Fiz’s heart?

Did you miss our previous article…
https://www.hellofaread.com/soap-opera/hollyoaks-ste-and-john-paul-back-together-as-kieron-richardsons-real-life-husband-body-doubles-as-james-sutton/

Prince Andrew is being failed by lawyers as ‘wall of silence’ over sex abuse...

Number of migrants smuggled into UK in lorries over last 7years ‘would fill Old...