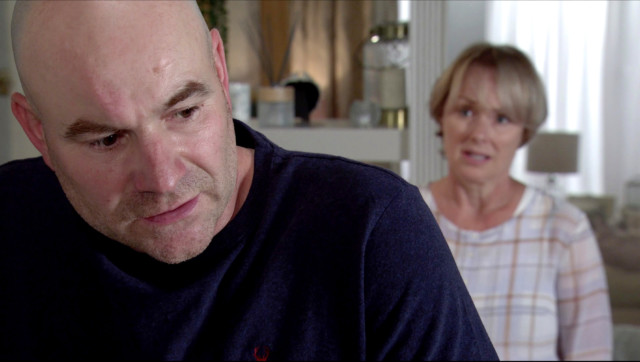 TIM Metcalfe announces he and Sally are leaving Weatherfield next week in Coronation Street as he discovers how Geoff has been threatening his wife.

Tim has been refusing to see his dad’s nasty side for months in the ITV soap. So what causes Tim’s change of heart? Here’s the lowdown…

Are Tim and Sally leaving Weatherfield in Corrie?

Next week’s episodes of Corrie will see it all kick off as Tim announces that he and Sally are going away to stay with Gina for a while – much to Geoff’s dismay.

If Sally and Tim stick to their word and leave Weatherfield, it’s looking like their exit will be temporary.

So fans needn’t worry as Sally and Tim should be making a return to the cobbles ahead of Yasmeen Nazir’s trial. What will Tim and Sally’s exit storyline be in Corrie?

Later this week, Alya will enjoy winding Geoff up about the money.

Geoff then heads off to threaten Sally and tells her that Tim will always end up choosing him over her as blood is thicker than water.

But next week’s episodes of the soap will see Tim finally take a stance against the bully after finding out about the way he spoke to his wife. Coronation Street fans were gutted when Tim refused to believe that Elaine was his mother and ordered her to leave Street Cars.

Viewers were frustrated further when Tim then threw a letter in the bin with Elaine’s phone number on the back, before telling Sally he’d had enough of her suspicions about his dad.

But might Tim’s change of heart towards his dad next week result in him contacting Elaine and asking for her side of the story?

Speaking to RadioTimes.com earlier this year, Ian Bartholomew teased that Geoff’s lies about Tim’s mother would begin to unravel.

Actor Ian said: “Geoff has basically lied to Tim for years about what really happened with his mother, Geoff’s first wife.

“We will be exploring things a little deeper which I’ve always wanted to do. It would be good to find out more about their past, it could be key to how the story develops.”

Rocketing costs of Net Zero, pensions and NHS could leave Britain on the brink...

EastEnders spoilers: Nancy Carter clashes with mum Linda after she interferes in her life

Meddling Covid marshals will be able to tell people which way to walk down...