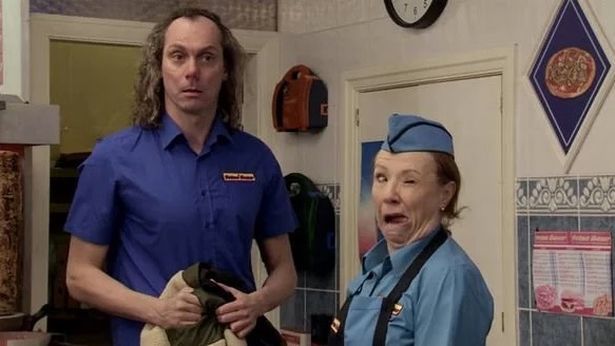 CORRIE viewers were left baffled when street regular Chesney Brown was replaced in the kebab shop by a character simply known as “Matt”.

Many fans feared the new dad-of-four had been usurped from his role as manager with no explanation.

In an episode of Coronation Street, Cathy Matthews and Bernie Winter finally put their differences aside after a bust-up after chatting in the takeaway shop.

But as the two buried the hatchet by Bernie offering to buy Cathy a can of cider and sharing a friendly tipple together, newcomer Matt waltzed in and presented himself ready for the shift.

However this left viewers confused – where was Chesney, aka long-time kebab shop manager? Has he lost his job? How will he support the quads? What is Matt’s back story?

Simply referred to as “Matt”, there was no other explanation as to who he was and why he had joined the cast. Where was Chesney? Why wasn’t he managing the kebab shop? Bernie and Cathy made up over a can of cider – natch

Understandably confused, viewers took to Twitter to question who Matt was and where he had come from.

One wrote: “Who is kebab man? Why is this his first appearance? Where is Chesney? I have so many questions!”

“Who the hell is that new guy in the kebab shop, Where’s he come from” asked a second.

While a third questioned: “Some random bloke has come into the kebab shop to work a shift, like we all know who he is.” If Chesney has been sacked, we riot

“Some random bloke has come into the kebab shop to work a shift, like we all know who he is,” penned a fourth.

The chef – who is played by actress Shelley King in the ITV soap – has been charged with attempted murder after she stabbed Geoff in the neck with a broken wine bottle defending herself.

She has been so manipulated and brainwashed by Geoff that she still hasn’t been able to tell police about her ordeal at his hands.

Corrie fans have started a petition to save Yasmeen And with her locked up for the foreseeable future, fans are desperate to free her – and themselves – from the harrowing storyline.

They have now launched a petition reminiscent of the Free the Weatherfield One campaign that sought to free Deirdre Barlow from prison in the 90s.

The petition, launched on Change.org, is called: “Campaign for ITV to provide an appeal to get Coronation Street’s Yasmeen Nazir Out on bail”.