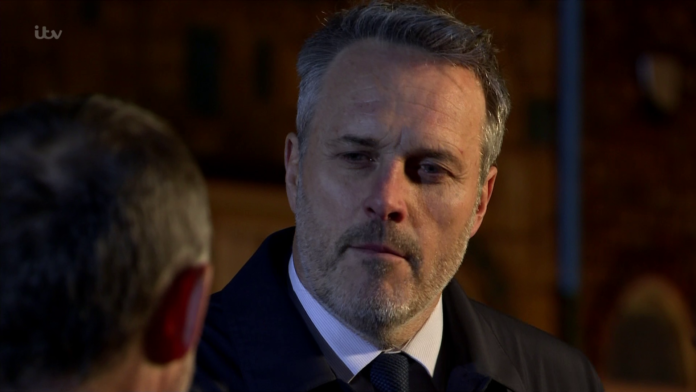 The sleazy sex pest (Mark Frost) has racked up enemies on the cobbles even since he joined last year and viewers had hoped that he’d be killed off.

But it turns out he’s in it for the long haul and has a yet-to-be-revealed link to a long-serving character.

A source said: “Ray might be discounted by the audience as someone who is going to disappear soon but hes actually the new baddie on the block after the indecent proposal to Abi, he blackmails Kevin into selling him the garage meaning he now owns two premises on the street.

“And this is just the beginning as he becomes a destructive force on the cobbles. He is going to be a thorn in the side of the residents, he is around for the long haul and hes going to ruffle many more feathers going forward.”

They added to told Metro.co.uk: “He will soon be unveiling the new look Bistro and he will be Kevs landlord but hes a bit if a man of mystery who seems very interested in the lives of the residents.”

Viewers had predicted a short life span for Ray on the ITV soap after the Bistro owner revealed his sex-pest ways.

One insisted “His enemies are mounting up.”

As another said: “Maybe Abi could murder him in cold blood and other characters could then lie and give her a false alibi so that nobody is held accountable. That would be nice. Hugely moral and fair.”

And one more typed: “I bet Ray will be dead by April”

He called the former Rovers Return barmaid Michelle to his hotel room – where he was waning in just a robe.

Ray made unwarranted advances towards her and wanting to bury his secret, he threatened her with a lawsuit if she revealed his sordid actions.

And Corrie fans know that Abi Franklin (Sally Carman) recently grew close to the new bistro owner – who managed to trick Michelle into handing the keys over to him before she left.

Abi shocked everyone when she then rejected Kevin Webster for a chance to snog Ray.

Bethany Platt (Lucy Fallon) later exposed his sex pest ways and on/off girlfriend Abi humiliated him at a gala she attended with him before stealing and torching his car.

But Ray has now discovered he has dash cam footage of Abi stealing his car, and she faces prison along with Kevin (Michael le Vell) who encouraged her to lie and gave her a false alibi.

ITV insist they were in contact with Caroline Flack before her death and had...