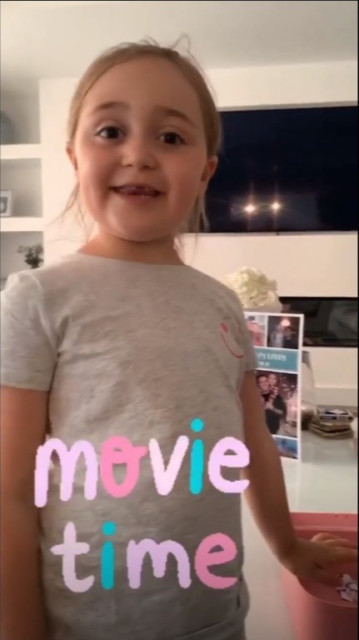 CORONATION Street’s Alan Halsall shares a rare video with daughter Sienna as the pair got set to enjoy a movie night together.

The soap star took to his Instagram story which showed his excited daughter pick the movie they were going to watch.

Sienna, 7, took a piece of paper from a box at random, which determined the film that would light up their television screen that evening.

The Tyrone Dobbs star filmed his little girl as she let his fans know how they were going to be spending the evening.

She announced: “I’ve had lots of fun in the pool and now it’s time for movie time.

“The movie tonight is going to be, let’s see, Madagascar 2!”

After picking a movie at random, Sienna and Alan will be watching Madagascar 2 Alan and his daughter have a very close and cute relationship as shown on father’s day as the pair recreated an adorable kiss snap even years after her birth.

The actor has got in the act and made a Tik Tok video re-enacting what he did on the day his child was born in honour of Father’s Day. Seven-year-old Sienna is Alan’s only child

This week the actor, 37, gave fans a look inside his incredible specially-designed £750,000 mansion in Manchester.

He and girlfriend Tisha Merry have given glimpses of what the place looks like inside before, with shots of its grand hallway and lavish living room.

But now we got a look at the garden too, with a vast barbecue set into the brickwork on one of the walls, with Alan yesterday seen in a pair of red shorts flipping up the hood and roasting meat in the sunshine.

Fans of Corrie got a look at the amazing garden thanks to Kirk Sutherland star Andy Whyment, who had popped round for an outdoors dinner with his family.

Did you miss our previous article…
https://www.hellofaread.com/soap-opera/coronation-streets-arianna-ajtar-strips-down-to-a-thong-bikini-to-sunbathe-in-the-heatwave/

Mario Kart Live that turns your home into a REAL race track has price...

State pension tax warning for half a million retirees as big bills could hit...