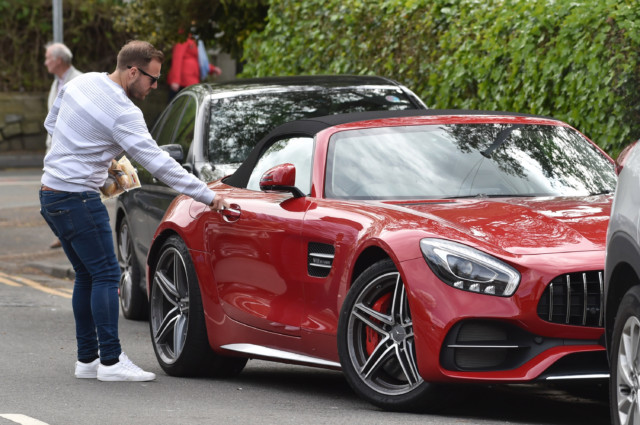 CORRIE star Alan Halsall is getting rid of his £175,000 supercar – because his daughter’s getting too big to fit in the back.

The Tyrone Dobbs actor picked up the keys for the bright red Mercedes AMG GTC as he still reeled from his break-up from wife Lucy-Jo Hudson and told fans: “You can’t buy happiness but you can buy a new car and that’s kind of the same thing.” The supercar costs £175k to buy

The actor – who also has a Harley Davidson motorbike – had toyed with trading his previous Mercedes convertible in for a Ferrari, but fell in love with the 189 mph GTC.

But just a year on, he’s opting for a more practical motor and told fans: “It’s time for a change.”

He accompanied a farewell picture of the monster with the word “adios” and included James Blunt’s hit Goodbye My Lover as the soundtrack to his sad send-off.

The coupe is notoriously cramped inside with small back seats which don’t fold down and a tiny boot.

Alan revealed he was upset about selling the car on Instagram Alan wants a new car with more room for his family The couple live in a palatial house in Manchester A source said: “It’s beautiful car but is essentially a two-seater because there’s hardly any room in the back.

“Now Sienna is getting older – she is seven in September – he needs a bigger car with more space – something that can transport passengers in comfort and have room in the boot for a big shop from the supermarket.”

And she recently revealed she wants kids – a year after falling for Street favourite Alan, 37. The lovebirds only went public with their relationship in April last year.

But in a frank question and answer session on her YouTube channel, the actress admitted that children are in her future.

She invited fans on social media to ask her questions for her latest video and confessed that the issue of kids was the most asked for topic. Tisha, 27, revealed: “This was the most asked – babies, babies. I’d like to think I’d have a child in the future – or children. Not sure how many. Who knows?

“I feel really fulfilled in life at the moment so I don’t think children are the next step but I think maybe in the future I may have a baby. Who knows?”

She also confessed to having bouts of anxiety and self-doubt but said Tyrone Dobbs star Alan was “very supportive” and helped her through any low moments.

Alan split from former Corrie star wife Lucy-Jo in May 2018 – only a few months after they’d moved into their new home in Worsley, near Manchester.

They had married in 2009 and just eight weeks after they announced their marriage was over, she revealed she was dating panto star Lewis Devine, with whom she swiftly set up home. They now have a son together.

Following the split from wife Lucy-Jo , Alan found solace in the gym – punishing his body with monster three-hour workouts to numb the pain of his broken heart.

But it was at the David Lloyd fitness centre near Manchester – popular with Corrie stars like Faye Brooks and Colson Smith – that he grew close to Tisha with early morning games of badminton.

Did you miss our previous article…
https://www.hellofaread.com/soap-opera/eastenders-max-bowden-and-tony-clay-say-they-forgot-camera-crew-were-there-during-three-hour-ballum-snogging-scene/

Pokémon Scarlet & Violet: The best Pokémon of each type