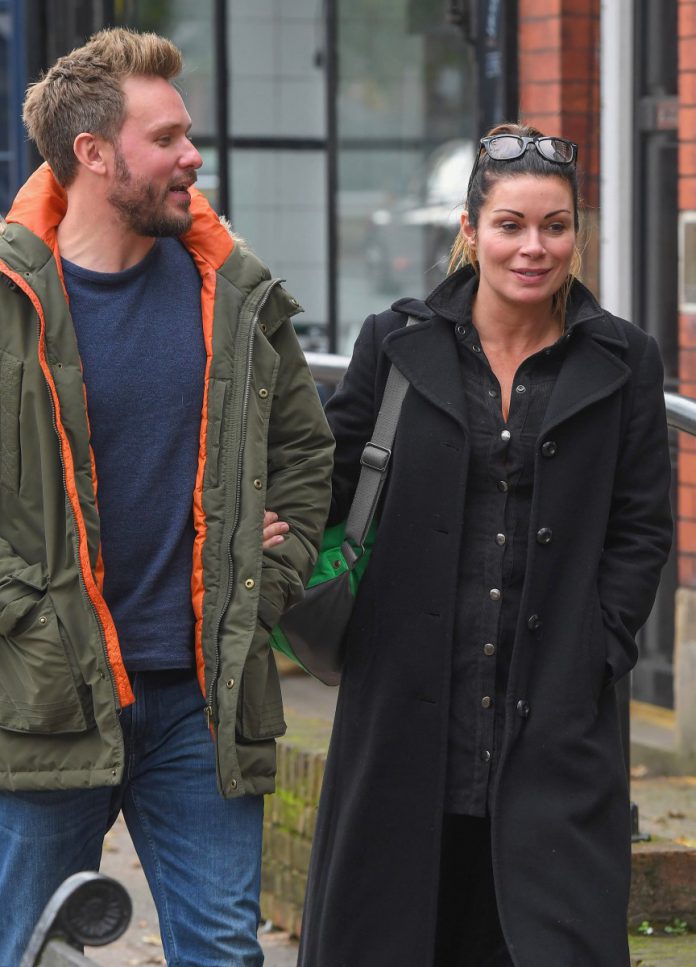 CORONATION STREET actress Alison King was seen wearing her engagement as she was seen for the first time since the National Television Awards.

Alison was seen kissing her co-star Mikey North at the ceremony but the pair have denied the claims.

Alison has been married since last year

A witness at the National Television Awards said of the actor and Alison: He has a family and shes engaged. Its the last thing you expect to see.

A source explained that King, who plays factory boss Carla Connor on the famous old soap, was being rowdy whilst she sat next to Mikey.

Mikey has two children with his wife Rachel

Mikey then leaning across to his co-star and put his hand on their Alison’s face before the pair locked lips.

The source added: Suddenly they both leant in and started snogging. I couldnt believe my eyes.

Afterwards they carried on holding hands. It wasnt long before a friend escorted her out. She linked her pals arm the whole way and they left.

Since then the Corrie duo have denied kissing each other at the event, with Mikey insisting he was just talking in Alison’s ear.

North, who plays loan shark Gary Windass on the show, released a statement which read: “I did not kiss my co-star Alison King during the recent National Television Awards.

“It is beyond ludicrous to suggest that I would or that I did. The grainy recording shows me simply speaking in her ear at what was a noisy public event.”

Meanwhile, Ali King released a statement of her own: “I would like to take this opportunity to say that, whilst it was obvious to see that regrettably I did have too much to drink at the National TV Awards, and chose to leave the event early, I did not kiss my co star Mikey North as has been reported.”

Reports circulated after the show which suggested that Alison was escorted out because she’d had too much to drink.

Alison and Mikey are co-stars on Coronation Street

Former Corrie actress Kym marsh leapt to the defence of her former Coronation Street co-star Alison King saying: “Even if she was tipsy, so what?”

She commented further on the incident in her column on OK! Magazine: “Some people were saying Corrie’s Alison King had so much fun she had to be ‘escorted’ out because she was drunk.

“Now I wasn’t there so I don’t know what happened, but I do know photos can be very deceptive. You only have to blink and you can look very drunk.

“They were all having a good time celebrating Katie and Peter’s wins. I’ve had a few tipsy moments at awards shows – it doesn’t bother me what people think.”

The actress is currently engaged to David Stuckey, who popped the question on a romantic cruise last summer.

David and Alison met in March 2018 when their personal trainer set them up together.

Mikey is married to actress Rachael Isherwood and the duo tied the knot in 2016.

33-year-old Mikey and Rachel have two children together, the second of who she gave birth to last November.

More than double the amount of voters care more about Brexit than party affiliation,...

I saved £23k deposit to buy first-home by taking part in medical trials and...

Coronation Street viewers in tears as Leanne and Steve are told son Oliver will...