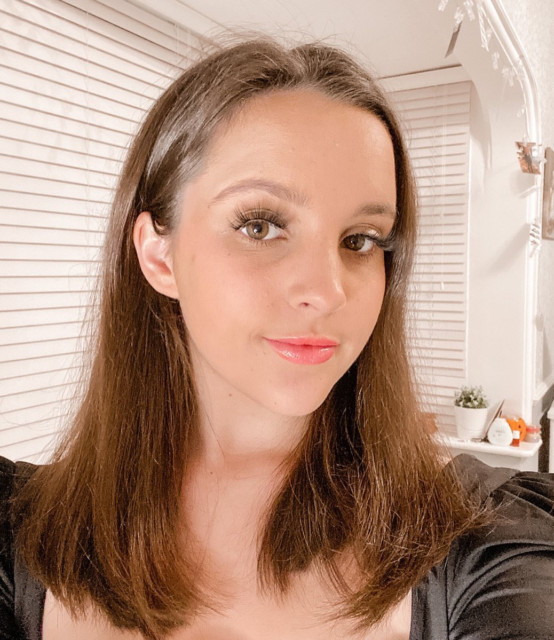 The 18-year-old actress, who stars as Amy Barlow on the ITV soap, shared a glam selfie as she prepared to celebrate a friend’s birthday on Zoom.

Actress Elle pouted for the camera, showing off her gorgeous make-up look, which include false lashes and a bright pink lipstick.

“Love a good bday zoom,” the star wrote underneath the picture, which saw her short brunette locks gently falling around her face.

Looking a world away from Amy, who is often spotted on the soap in school uniform, Elle donned a glamorous black top for the special occasion.

Her eyebrows had been shaped into natural arches, adding a light blush across her cheeky and nose.

Elle has been playing Amy Barlow on the hit ITV soap Elle’s character does not often wear much make-up And the character is often seen wearing school uniform

Fans were quick to flood the comments in awe of her makeover, dubbing the young actress “beautiful”.

“Wow, you look different to Amy on Corrie,” wrote one fan, with another chiming in: “Pretty! I love Amy in the Street.”

“There is no end to your beauty, is there?” gushed another, with a fourth adding: “Jaw dropping beauty.”

One even made reference to the soap star’s on screen-mum Tracy, writing: “Beautiful ‘Barlow. Not even your ‘mum’ can be this killer.” Amy Barlow is the daughter of Tracey Barlow Actress Elle has worked on the cobbles set since she was eight years old – previously known as Patience Cropper.

She recently was at the centre of a teenage pregnancy storyline after Amy got involved with gang leader Tyler Jefferies.

Amy decided not to keep the unborn child, having a termination behind the backs of parents Steve and Tracy, who planned on adopting the child.

The teen battled with how to get out of the predicament, especially as Tracey prepared to take Amy to her 12 week scan. She got herself out of the difficult situation by letting her mum believe that she had suffered a miscarriage.

Patients waiting 18 months for NHS treatment can go private for free in plans...

How to get a McDonald’s Big Mac for only 99p