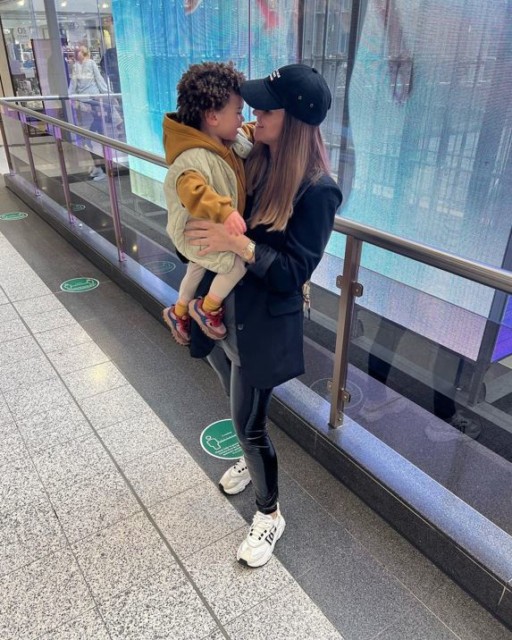 BROOKE Vincent has revealed her heartbreak with fans after taking her toddler son on a special shopping trip.

The Coronation Street actress, 29, took her two-year-old boy Mexx to get his first pair of “big boy underpants” as she prepares to potty train him.

But Brooke found herself getting emotional when her excited tot was ignored by some older boys as he proudly showed off his pants featuring the cartoon character Bing.

Taking to Instagram, the mum-of-two posted a sweet photograph of herself cuddling Mexx in a shopping centre.

Recounting what happened, Brooke told her followers: “Today we went to get Mexx’s big boy underpants!!

“I made a huge fuss [in] the aisle explaining these are what big boys wear!

“After we finished choosing a couple of ‘bigger’ boys walked past, I then watched Mexx notice them and take his new ‘bing’ pants out of the basket and hold them in the boys eye line.

“They just carried on walking past none the wiser!! My heart broke twice over at that moment!”

Brooke then admitted she was so devastated for her deflated son that she even considered bribery for a second.

Replying to Brooke, one fan told her: “This story is too cute

what a cutie, I’m sure he will smash it!”

Brooke is currently on maternity leave from Coronation Street following the births of both Mexx and her second son, six-month-old Monroe.

The star, who shares her boys with footballer boyfriend Kean Bryan, has played Sophie Webster in the ITV1 soap since she was 15 years old.

But she has not been seen on screen since 2019 – and Brooke has no immediate plans to return to Weatherfield, either.

In a recent interview with the Daily Star, Brooke said: “I left to have my first little boy and then I always knew I wanted my children close together, so then I had my other little boy and I’m just being a mum at the minute.

“Anybody that’s got children will tell you how hard it is to even put the washing in the washing machine. So yeah, I’m just being a mum and getting myself back and trying to get us into a routine and focusing on them.

“It’s kind of a decision that we made as a family and it’s just nice to have that special time with them without having major distractions of what’s been going on.”

Although she is not currently appearing on screen in Corrie, Brooke has reportedly been raking in mega-money thanks to ad deals with firms like Asda, netting her more than the £150,000 salary she earned from the soap. Brooke has no immediate plans to return to Corrie