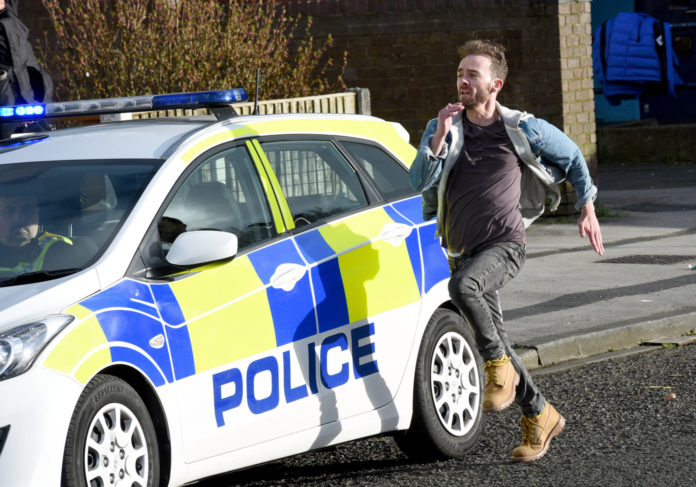 CORONATION Street’s David Platt runs for his life after taking on dodgy drug dealers in an upcoming episode of the ITV soap.

The hairdresser – played by 32-year-old Jack P. Shepherd – sprints down a street and past police cars as he tries to shake off a gang of thugs on a rough estate.

It looks like David Platt has turned vigilante when he confronts a gang of drug dealers on a tough estate.

He can be seen trying to get the attention of a group of dodgy-looking yobs in pictures taken on location.

He jumps on top of their car, which is parked in the middle of a housing estate, and stamps on the bonnet before drawing them out and running off.

Actor Jack, who has starred in Corrie for 20 years, then jumps on their car before they chase him, and he only escapes when he comes across policeman friend Craig on a routine stop.

He looks to be taking on the lowlife thugs after it’s revealed his wife Shona has reunited with her killer son Clayton.

He confronts a gang of drug dealers on a tough estate

They threaten to catch up with him

David’s apparent mission comes after his wife Shona is released from the specialist memory clinic she has been staying in as she recovers from her brain injury.

She was shot at Christmas and left unable to remember anything of her husband David or his children and family.

Shona left him devastated in January when she requested that he no longer visit her as it was too distressing.

Meanwhile Shona has reunited with her killer son Clayton

And now it looks like she will be released from the clinic – but will still away away from David and the family.

Pictures taken on location also showed Shona reuniting with her killer son Clayton Hibbs, who she last saw when she stabbed him to save her own life after his prison break attempt.

Clayton was last seen being dragged back to jail after taking his mum hostage – forcing her to stab him as she fought for her life.

Actress Julia announced her return to the soap earlier this week after taking just four months off for maternity leave.

Sporting her red Coronation Street jacket, Julia jumped into the shot to deliver the good news to the show’s fans.

She exclaimed: “Hi everyone, you may be wondering why I’m wearing my Coronation Street warm coat, it’s because Shona’s back!”

PS5 release date, price, games and more as UK to get console a WEEK...