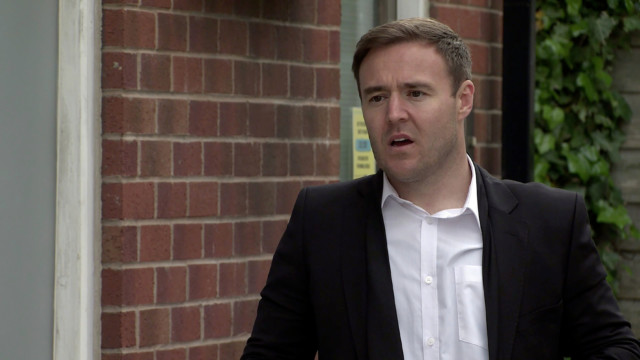 FIZ Stape is set to be devastated by the news Tyrone Dobbs has got Alina Pop pregnant in Coronation Street.

The mechanic – who is played by Alan Halsall in the ITV soap – moved out of his family home and left his long-term partner Fiz after cheating on her with Alina.

Tyrone discovers Alina is pregnant with his baby

In scenes set to air next week, Tyrone is grateful when Fiz helps him organise Kirsty’s funeral and explain to Ruby that her mum has died next week despite their acrimonious split.

Meanwhile, Alina hides her concerns that she might be pregnant.

When she hears about Tyrone’s past with Kirsty at the factory, she’s shocked and hurt that he didn’t tell her. Tyrone and Fiz head to his ex Kirsty’s funeral

When she confronts Tyrone, demanding to know why he kept the abuse a secret from her, she blurts out that she’s pregnant.

Tyrone doesn’t react well and leaves to head to his meeting at the undertakers.

As he struggles to concentrate on the funeral arrangements, Fiz assures him that she’s happy to sort joint custody. Meanwhile, Evelyn realises that Alina must be pregnant when she cottons onto her nausea.

Later in the week, Alina tells Tyrone her morning sickness is too bad to attend Kirsty’s funeral.

At the funeral, Tyrone fails to tell Fiz about Alina’s pregnancy.

Is he having doubts?

Tyrone has been the butt of many a joke in recent weeks after he shacked up with Alina, who’s 15 years younger than him.

Fiz had a good laugh at her ex’s new look when he showed up to an event at the Bistro in a pair of ripped skinny jeans and a velvet shirt.

Tyrone was mortified when he tried to bend down to pick up Alina’s purse, but couldn’t thanks to the tight jeans.

Did you miss our previous article…
https://www.hellofaread.com/soap-opera/eastenders-natalie-cassidy-and-goggleboxs-amy-tapper-glam-up-for-friendsfest-red-carpet/

I’m A Celeb viewers slam campmate as ‘so fake’ after he tries to ‘make...

Strictlys Shirley Ballas sends fans into a spin with mind-blowing throwback from her professional...