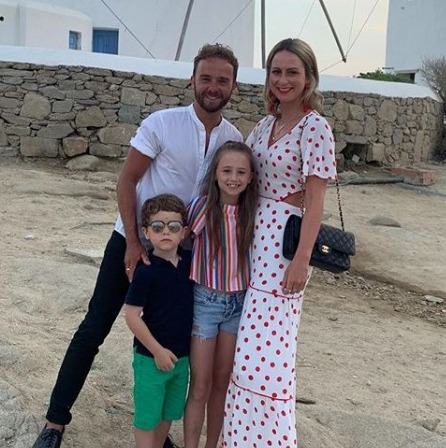 CORONATION Street’s Jack P. Shepherd said he took a YEAR to introduce his kids to girlfriend Hanni Treweek because he didn’t want her to be seen as “a horrible stepmum”.

Jack, 32, who has played David Platt on the Cobbles since he was 12 years old, embarked on his new relationship with the stunning PR girl in 2017.

They moved in together last year – 14 months into their relationship.

The actor has children, Nyla, 11, and six-year-old Reuben, from his relationship with ex Lauren Shippey, and son Greyson from a one night stand with Sammy Milewski in 2010.

Speaking to OK! magazine Jack said: “We were together for about a year before they met. You don’t want to introduce a new partner to small children too soon.

“I was a bit apprehensive at first because I hadn’t introduced them to a girlfriend before. I was worried Hanni would end up like a Disney villain and would be seen as a horrible stepmum.” The couple moved in together last year He added: “I wasn’t sure how it was going to go down but Nyla took to Hanni immediately – they both love fashion and make-up.

“Reuben liked her straight away too and they quickly started asking if Hanni would be there when I picked them up.”

It has been reported Greyson is not a part of his dad’s life, but Jack pays child maintenance after demanding a DNA test following his birth. Jack – who plays David Platt on Corrie – has a third child, Greyson Milewski He and Hanni were introduced at a mutual friend’s wedding and later bumped into each other in a supermarket.

But Hanni fled because she thought she “looked a mess” in her gym gear.

Jack revealed: “I texted her afterwards and said ‘that was awkward’ and she told me she thought she looked a mess and then we started texting from there.

“I actually thought she looked fit – I just saw the girl I fancy wearing Lycra! We quickly went on our first date and we just clicked.”

Hanni added: “He just made me laugh so much. Finding a guy who makes you crack up is so important.”

Jack has vowed to marry Hanni but said he didn’t want to “scare her off” by pinning her down early on.

He said: “We want to do all those big milestones like marry, have kids and buy a house, we’re just not quite there yet.”

Did you miss our previous article…
https://www.hellofaread.com/soap-opera/strictlys-shirley-ballas-tells-bookies-fave-maisie-smith-not-to-get-cocky-and-gives-her-verdict-on-all-the-celebs/

Government borrowing ballooned to £62 BILLION in April to bail out Britain in coronavirus...

Simon Cowell and Lauren pile toys for Eric into their Rolls-Royce as they’re seen...