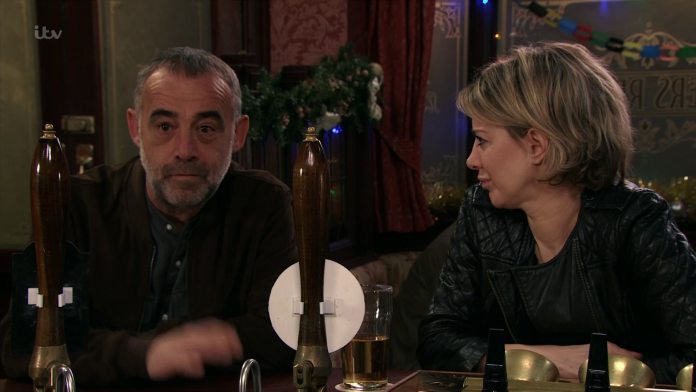 Viewers have witnessed rising chemistry between Kevin (Michael Le Vell) and Abi (Sally Carman) on the Cobbles for months now, but tonight it seemed to fizzle out.

In the first half of the double-bill, Abi jokes to Kevin about a disastrous date before asking him to go for a drink with her after work.

Later, as they sip their pints in the Rovers, Kevin admits that he changed his plans to spend the evening with her.

Abi then cuts their evening short and tells Kevin to go and spend time with his pals at the banger race event.

And when she tells Sally about her evening with Kevin, his ex-wife is left fuming over Abi giving him mixed signals.

She said: “Just don’t mess him about!”

This week, Abi is set to break Kevins heart when she sets her sights elsewhere.

Abi waxes lyrical to Sally about a steamy snog she shared with Ray, when Kevin emerges from the kitchen.

Abi is horrified he’s overheard her and embarrassed to have hurt the mechanic.

Later, Ray calls at the garage and is impressed to discover that Abi is a mechanic.

However, when Tim lets slip that she learnt her trade in prison, creepy Ray makes a sharp exit.

Where is Love Island filmed? First look at whats new in the villa

Kate Middleton praises teachers for being a ‘lifeline’ to families & begs them to...