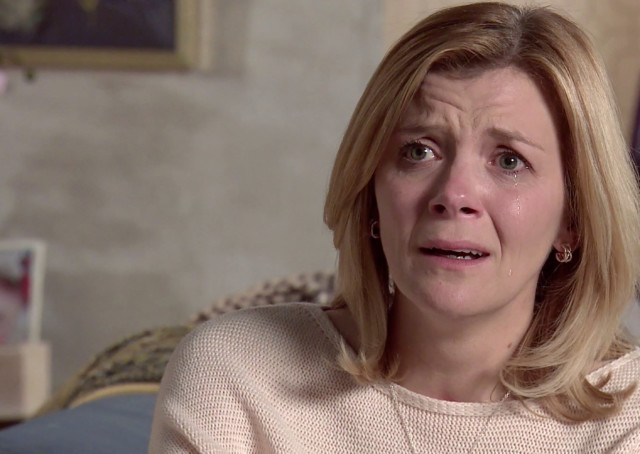 CORONATION Street’s Leanne Battersby will be caught dealing drugs by the police in a shock twist.

The grieving mum – who is played by actress Jane Danson in the ITV soap – is being forced to deal drugs by Harvey to pay off her son Simon’s debts. Leanne will be caught counting her ill-gotten gains

But the new trailer has revealed the moment Leanne is caught by police counting her ill-gotten gains in a car.

The police officer flashes his warrant card and it looks to be game over for Leanne.

In last night’s episode Leanne was caught in a trap by Harvey after trying to take him on.

Walking up to his car, she said: “You Harvey? I’m Simon’s mum. I believe that’s what he owes you for the stolen drugs – there’s a thousand quid there, you can count it.” As Harvey tried to tell her that Simon owed him double that – and that he needed to work the rest off, Leanne got a bit of her old fire back.

She stood up to him and faced him down. Leanne was forced to deliver drugs “He’s a good kid, he’s never done anything like this before – he’s not cut out for it,” she said.

Harvey told her that’s why he wanted Simon – and Leanne threatened him with the police so he responded with a threat of his own – to put her and Simon in hospital.

She replied: “Oh I know what you did to Jacob. You’re a monster.”

But as she realised Harvey had her backed into a corner, Leanne had to offer to sell the drugs herself. Leanne tries to make a deal for her son Later she was forced to deliver a huge brick of drugs to a dodgy flat, but managed to hold it together to get out of there in one piece.

And after Harvey summoned her for another drop.

Please don’t do it Leanne

He said: “Don’t talk just listen. I heard it went alright today so I lined you up another one for tomorrow.

“You think you can just walk away? I say when you’ve paid off your debt, not you. I’ll call you tomorrow, make sure you answer.”

Viewers are desperate for Leanne to go to the police and be saved.

One wrote:  “#Corrie just for once can Leanne do the correct thing in just going to police & explain that Simon was groomed into dealing rather than this ridiculous storyline.”

A second said:  “Leanne’s getting in deeper and deeper into the drug world! Run girl and run fast #Corrie.”

Another added:  “What are you doing Leanne, dealing drugs really? #Corrie”

Prince Charles reveals the Queen is ‘all right’ on Brixton visit as monarch, 95,...