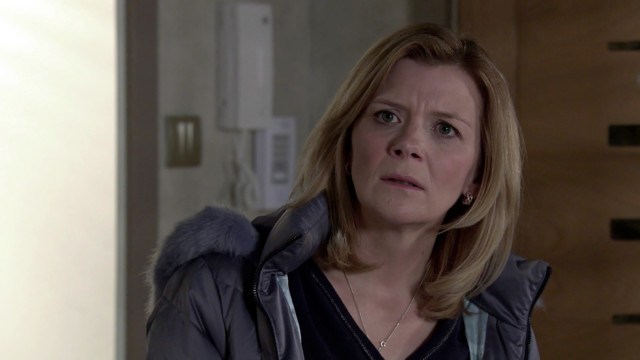 CORONATION Street’s Leanne Battersby’s life is going to take a dark twist when she is forced into dealing drugs by gangster Harvey.

The grieving mum – who is played by actress Jane Danson in the ITV soap – will be threatened into dressing up as a nurse to carry out Harvey’s sick demands, actor Will Mellor has revealed.

Leanne Battersby will be forced to deal drugs by evil Harvey

Viewers know Leanne’s son Simon has been drawn into a drug’s gang and manipulated into getting in debt with them.

He is being forced to sell drugs under threat of death and next week his mum will discover the full horrifying truth.

She will attempt to sort the problem out, but still grieving from the death of her son Oliver, Leanne isn’t ready to take on a gangster.

And now actor Will has revealed his character Harvey will forced Leanne to work for him. The harrowing scenes will air this month

He told HOAR: “It’s about self-gain. He likes that Leanne/Simon go under the radar, it ticks the boxes for him.

“If anything happens to them it doesn’t get back to him, he gets away scot free.

“The horrible people who do this sacrifice others so they don’t get caught.”

He added: “Leanne is vulnerable, he says ‘you’ve got a nice face, trustworthy’, no one will suspect her.

“He even gets her to wear a nurse’s outfit and he’s saying ‘people will be clapping you in the street!’

“It’s great to play but he’s horrible. He doesn’t care and he finds it quite funny she’s walking round dressed as a nurse delivering drugs.

“I’m so impressed with the writing on Corrie. These people are out there, and that’s why I want to do it justice and play it right. I don’t want to be a cartoon baddie.”

Did you miss our previous article…
https://www.hellofaread.com/soap-opera/eastenders-fans-predict-heartache-for-isaac-after-lolas-reaction-to-his-schizophrenia-revelation/

I’m A Celebrity’s Simon Gregson & Adam Woodyatt terrified as snakes wrap around their...

Coronation Street villain Ray Crosby has secret link to a character and will become...

The Royal Family homes with ‘secret’ passageways and rooms – from Buckingham Palace’s cinema...

Boris’s own MPs demand free school meal U-turn for ‘those who need it most’...