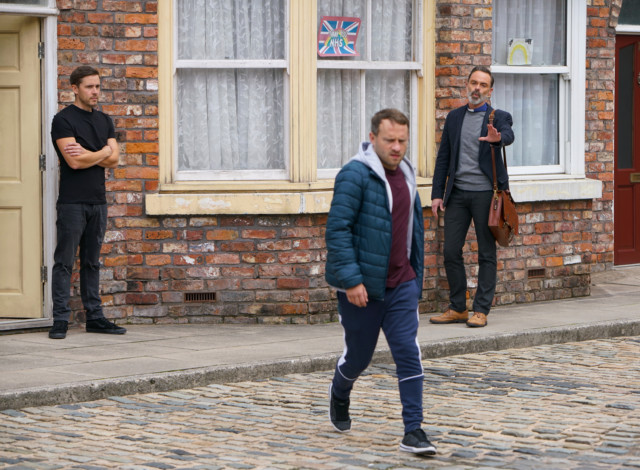 THE next few months could be the last of Coronation Street’s Paul Foreman and Billy Mayhew as Todd Grimshaw continues to drift them apart.

Peter Ash – who plays the factory worker in the popular ITV soap – has lifted the lid on what is in store for the lovebirds… and it doesn’t sound good.

Could this be the end of Billy Mayhews and Paul Foreman?

Over the past few months Billy’s ex Todd (Gareth Pierce) has been trying to get back into his life again by using Paul.

He has asked a young boy called Will to pretend he’s in trouble and ask for Paul’s help when he’s supposed to be doing things with Billy as a couple.

Earlier this week it was revealed that Todd’s latest scheme involving Will backfires, and results in Summer Spellman (Harriet Bibby) fighting for her life.

Peter admitted that the coming months will really put a strain on their relationship as he said: “Paul clocks Will straight away. He doesn’t say anything initially because everything happens so quickly and they have to get to the hospital with Summer. “He then starts to put the pieces together and he feels massively guilty that it is him who has brought this to their doorstep literally.

“It takes him a little while, but when they get back to the flat and he sees the mess that Will has caused, he finally admits to Billy and he realises it all comes down to Paul getting too involved with Will.

“Paul of a year or two ago might have shied away from admitting his part in this, but he has built this family with Billy and Summer and he knows he doesn’t want to lose it.

“This is one of the toughest things Paul and Billy have had to work through, and without giving too much away, it is potentially something which could see the end of their relationship. Todd doesn’t like the fact his ex has moved on

“Billy feels such a responsibility for Summer and now she has been out in danger because of Paul’s actions.”

The actor didn’t want to give too much away when asked if the Todd’s evil ways really do manage to tear them apart.

However he did admit: “We will really see him struggle if this was the end of his relationship.

“I am excited to see what will happen. It is another chapter now, this is a more mature Paul, so how will he deal with this situation if he finds himself without Billy and Summer?” Will Billy and Paul be able to pull through?

However Corrie boss Ian MacLeod has hinted that things do become too much for the pair.

He told Metro.co.uk: “Todd never goes with something in a normal way – it’s bags of skullduggery, he kind of enjoys his torturing, he is very selfish when he wants something and that prize in this case is Billy.

“In an underhand way, he undermines Billy and Paul’s relationship – he will get what he wants but the lengths he goes to will be his undoing.”

Catch the next episode of Coronation Street tonight on ITV at 7.30pm.

Rishi Sunak & Liz Truss – where do the two PM contenders stand with...

Enjoy cheap family meals at Morrisons Cafes or cook up your own at home...