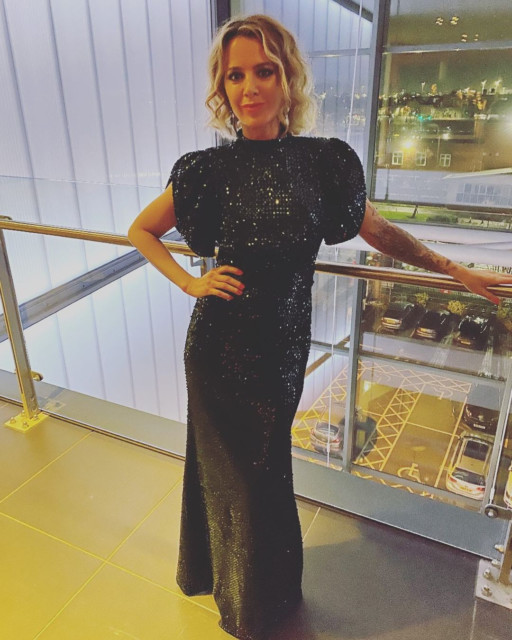 CORONATION Street’s Sally Carman showed off her glamorous side this weekend as she stepped out at the Royal Television Society Awards.

The actress, 40, pulled out all the stops in a stunning, floor-length, emerald sequinned dress.

The TV star, who plays Abi Franklin on the show, accessorized the look with a pair of matching emerald earrings while her blonde locks were styled into soft curls.

Sally also showcased her colourful and elaborate tattoo which spanned the full length of her arm.

She captioned the snap: “Felt a million dollars in my @moobou dress tonight.”

Sally added: “All bought and paid for, just wanted to give a little shoutout for a small business that hit the spot,” while urging her fans to support local businesses.

The Corrie star was inundated with compliments from her fans, as well as her fellow soap stars.

“You look gorgeous, dress is fab,” one person wrote.

“Oh wow you look amazing, love the dress it totally suits you,” another fan added.

One person wrote: “The colour of that dress is stunning. You look, fabulous darling.”

Earlier this month, Corrie fans were left in tears when Abi and Kevin Webster finally got married.

The mechanics got hitched after postponing the wedding repeatedly.

Sally looked worlds away from her on-screen character Abi Franklin

Megan Barton-Hanson shows off her cheeky side as she strips topless in sexy thong...

Sainsbury’s shoppers can DOUBLE their Nectar points from today