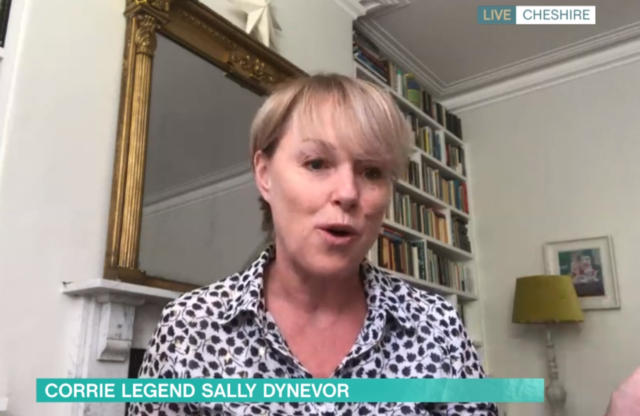 Sally is married to Geoff’s son Tim, but lately her suspicions have been growing as Yasmeen’s granddaughter Alya insists that Geoff was abusing his wife before she stabbed him in self defence.

The 57-year-old actress appeared on This Morning earlier today where she opened up about the harrowing plot.

Admitting that Sally will become pivotal in the ongoing storyline, the star explained: “Remember, Sally spent time in prison for something that she didn’t do, so there’s no way she will allow Yasmeen to spend years behind bars for something she didn’t do.”

In 2018, fans were horrified when Sally was sentenced to four years in prison for fraud, money laundering and bribery when she was actually innocent.

When asked if it will impact her character’s relationship with Tim, Sally continued: “This is really going to be affected because he’s on Team Geoff, and I was on Team Geoff but now I found out about what’s going on, I’m going on to Team Yasmeen. There is ‘no way’ Sally will let Yasmeen go to prison

“I think Sally would want to help her as much as she possibly can.”

Sally also shared her excitement at returning to filming next week as she admitted that she was needing to “read back” scripts to remember where they were up to.

She told Holly and Phil: “It’s very strange as we all finished at the end of March, and we are getting scrips now and have to read back to see where we were.

“Our hair’s grown – make-up are going to have a real time of it.” The star also spoke about returning to set next week Sally is starting to see through Geoff’s ‘nice guy’ act

She then remembered: “We will have to do our own make-up, which is really funny as I am rubbish at it.”

It was previously revealed that Sally will kick Geoff out of her and Tim’s house after deciding that he can’t be trusted.

Sally’s turning point comes this week when she finds out that Geoff used an escort agency while he was married to Yasmeen.

Viewers have long suspected Sally holds the key to exposing father-in-law Geoff’s web of lies after she began to finally see through his “nice guy” act.

Coronation Street has been dominated by Geoff’s abuse this year, which came to a head when Yasmeen snapped and jabbed him in the neck with a broken bottle – an attack she is now facing a life behind bars for. Did you miss our previous article…
https://www.hellofaread.com/soap-opera/emmerdale-spoilers-samson-dingle-stuck-in-france-as-his-parents-isolate-at-the-farm/

Meghan Markle news latest – Harry ‘has made a MASSIVE decision’ about whether to...

EastEnders’ Hetti Bywater should dream on… One day, that bloke who looks so wrong...