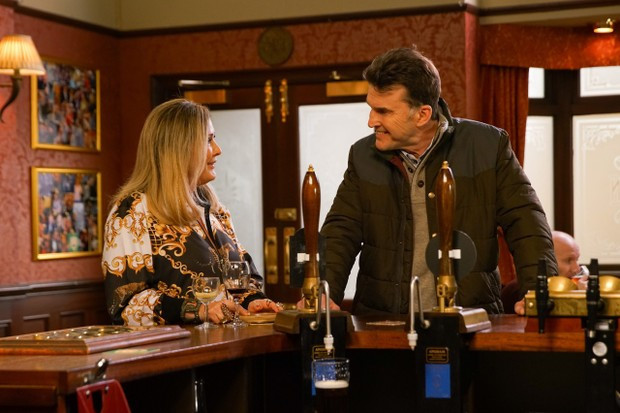 Barmaid Liz is set to leave Weatherfield over the summer after actress Beverley Callard quit after 30 years playing her.

Liz’s attraction to Scott could be a problem

And now it seems like Liz’s exit storyline has begun with her flirting with dangerous newcomer Scott.

He arrived this week and struck fear into Johnny Connor’s heart when he booked a long let in the Rovers – leaving Johnny to hatch a plan to flee to France.

However, actor Tom Roberts has teased that Liz’s historically bad choices with men is happening again with Scott.

He told Metro: “There is an instant spark with Liz, most definitely and that will be further explored and picked up again when this current situation is over. “Liz has a history of attracting the wrong men – an understatement really! So the fact that she gets her eye on him is probably an omen of doom for what kind of guy he really is!”

He said: “Liz’s exit is a long way off yet, but the idea is that it’s a result of this story I’m hinting at for Steve and Tracy and the big clans at war story we are telling.

“It will arise from that and, at the moment – and again it’s only in its embryonic stages – the idea is that Liz is attempting to do something heroic for her son that will probably go slightly wrong in a way that it will corrupt her relationship with Steve and she’ll have some making up to do but ultimately determine that the best place for her is not in Weatherfield because she and Steve are upsetting each other.

“But we want it to be big and heroic and befitting of a character of that long-standing in the show and she’s a tough woman Liz McDonald so we wanted to do something that was reflective of that rather than anything where she sort of goes out on a low ebb.

“It’s still in the planning stages but a lot about of what Bev said in her interview about she’s going out with a bang and we’re certainly not killing her off, all of that is true.

“But in terms of the detail of it, TBC, but it will be some heroic effort to save Steve from the nightmare in which he finds himself.”

How are lockdown rules different in England, Scotland, Wales and Northern Ireland

Royal Mint launches new 50p coin worth up to £2,175 to celebrate decimal day

I refused to chip in money for our Platinum Jubilee street party, now my...