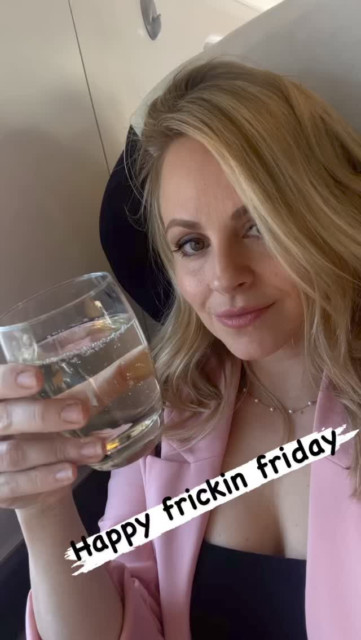 CORRIE favourite Tina O’Brien has hailed her husband Adam Crofts her “everything” amid her row with ex Ryan Thomas.

The Sarah-Louise Platt actress, 38, was alleged to have taken off a wing mirror and damaged paintwork on Ryan’s Range Rover with a baseball bat last month.

Coronation Street favourite Tina O’Brien has heaped praise on husband Adam Crofts amid her row with Ryan ThomasThe Sarah-Louise Platt actress, 38, dubbed the PT ‘my everything’

The pair, who both starred together in the ITV soap, dated for six years until 2009. They have a 13-year-old daughter, Scarlett, together.

Tina was spotted looking downcast in her native Manchester earlier in the week yet has now taken to Instagram to show she’s putting the blip behind her.

She shared an image showing her raising a glass to the camera in a cheers, with the caption “Happy Frickin Friday.”

The actress, dressed in a glam baby pink blazer paired with a gold necklace, appeared to be travelling on a train as she followed up her post with a sweet tribute to her PT husband. She uploaded a screen grab of an intimate conversation from her Whatsapp chats where he had written: “You’re amazing.”

The ITV star had replied to him and wrote: “You’re more amazing and you inspire me to be better, bolder and braver.

“One day I’ll be as bad ass as you, but thank you for being my mentor without even knowing you are.”

The mum of two added in the caption: “He’s my everything.”

Meanwhile, Ryan, 37, has been dating former Towie star Lucy Mecklenburgh, 30, since 2019. They have a young son and another child on the way.

HOAR on Sunday revealed tempers flared last month when Tina went partying at a friend’s house. She was alleged to have attacked Ryan’s Range Rover after he drove to the location.

A source close to him said at the time: “Tina and Ryan barely speak nowadays and this seems to have snapped the fragile thread their relationship was hanging by.

“They managed to make their peace after splitting up. But recently that appears to have broken down, and it’s hard to see a way back.”

Neither Tina nor Ryan have commented about their row.

A source said: “Ryan will be billing Tina for what she has done to his car. She caused around £1,000 worth of damage after going at it with a baseball bat.

“The paintwork needs sorting out and the wing mirror is a write-off.”

The Coronation Street couple’s daughter, Scarlett, now 13, was less than a year old when Ryan called time on their relationship in 2009, with Tina later claiming that he broke her heart — despite her desperate pleas. Tina admitted she begged Ryan to change his mind, but that instead he “refused” to “fix” their troubled romance. The cute couple married in 2018 Tina appears to be putting recent events behind her after she was alleged to have hit ex Ryan;’s car with a baseball bat Tina co-parents daughter Scarlett, second left, with Ryan but the exes are not on good terms

Simon Cowell is in ‘a lot of pain’ after operation on broken back as...

Brits can expect an economic bounce, Brexit certainty, a sense of national optimism and...