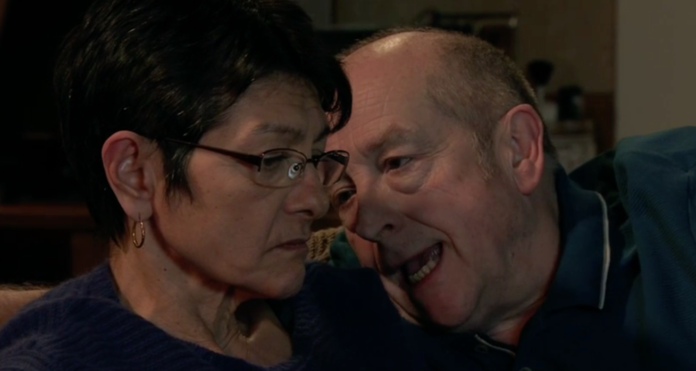 CORONATION Street fans are relieved after Yasmeen finally realised Geoff Metcalfe has been abusing her.

The chef – who is played by actress Shelley King in the ITV soap – was tricked by Geoff’s faked suicide attempt tonight into not going to Zeedan’s wedding and instead staying with him.

Geoff has been controlling Yasmeen’s every move

She told granddaughter Alya: “Just go without me. Tell Zeedan I’m sorry. I can’t give up on my husband.”

Alya said: “Oh fine, I give up. There’s clearly no getting through to you. You know when Geoff finds out you’ve not gone to the wedding he’s going to stroll through the door like nothing’s happened.

“You’ll have missed your only grandson’s wedding and you’ll have no-one to blame but yourself.”

And as if by magic when Alya left that’s exactly what happened with Geoff walking in as if nothing had happened. Yasmeen said: “Oh my God where have you been? Did you get my messages? I’m so glad you’re OK.”

He told her: “So am I now I’ve got you back. I’m nothing without you, you know that. I don’t want to talk about it – it’s over, let’s put it behind us.

“I’m fine now, you’re all I need. We’ve both had a stressful day, I think we should have an early night tonight.”

But his answers clearly troubled Yasmeen and she told him she would be taking the spare room, something which put Geoff out.

He walked out to go and buy them dinner from the chip shop and when he was gone Yasmeen seized her chance.

She called the police and asked about finding out about Geoff’s abusive criminal history under Claire’s Law.

Viewers were overjoyed that the harrowing coercive control storyline is finally coming to an end.

One wrote: “I think that Yasmeen has actually just seen the light, she’s reeling him in to get revenge. I even think shed tempting sneaking away #Corrie”

EastEnders star Maisie Smith dances with lookalike mum as she spends lockdown with her...

Prince Harry will continue to serve the UK for the rest of his life,...