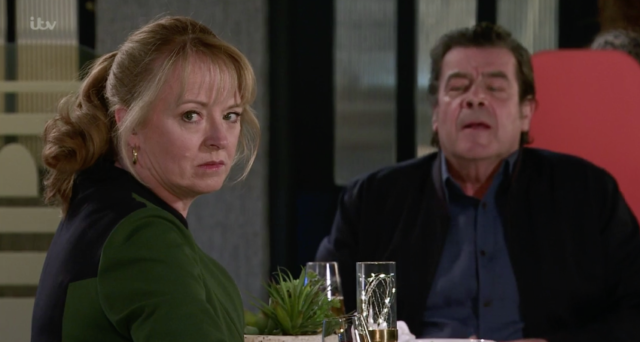 EAGLE-EYED Coronation Street viewers spotted a huge blunder during Friday night’s episode when Johnny Connor recognised Sharon Bentley from prison – as the truth about her past started to unravel.

Jenny Connor has been growing suspicious about Sharon Bentley in recent weeks as she tries to figure out why she’s really returned to the cobbles.

And it looks as though she’s slowly starting to unravel the truth about Sharon’s secret past after an awkward meeting with Johnny on Friday.

Sharon had been visiting her drug dealer nephew Harvey in prison, but lied to Jenny, instead telling her that she was actually involved in a prisoner mentoring scheme.

However, Sharon’s lies began to unravel when she bumped into Jenny and Johnny at the Bistro – and Johnny said he recognised her from prison

I know where I’ve seen you before – Highfield Prison” Johnny told Sharon in the bistro.

The truth about Sharon’s past is slowly unravelling Sharon told Jenny she was involved in a prisoner mentoring scheme

“Oh, yeah, she does that mentoring scheme,” Jenny said. “The one you didn’t know about.”

But some eagle-eyed viewers were quick to note that it wasn’t likely that Johnny would recognise Jenny, given that he’s been suffering from sight loss due to his MS.

They took to Twitter to share their thoughts, with one viewer writing: “Ahh what are the chances that blind Johnny would recognise her?”

Another chimed: “Of course the blind man recognises her!” And a third complained: “Aww come on #Corrie writers! Johnny was blind in jail ffs!”

However, one Twitter user was quick to point out a potential way that Johnny might remember Sharon.

“Johnny was off his face and blind most of his time in prison, so no way he saw Sharon. Maybe he recognised that laugh of hers,” they wrote.

While Sharon may have brushed off the encounter with Jenny and Johnny, Jenny appeared hellbent on finding out the truth and later headed over to see Gary Windass to do some digging.

Gary remembered that his time in prison had overlapped a few days with drud dealer Harvey’s and promised to look into any connection he might have to Sharon.

He later confirmed that Sharon is actually Harvey’s aunt.

Love Island’s Callum and Molly on the rocks after blazing row on night out...

Roman Kemps furious girlfriend hits back at Im A Celeb fans who tell him...