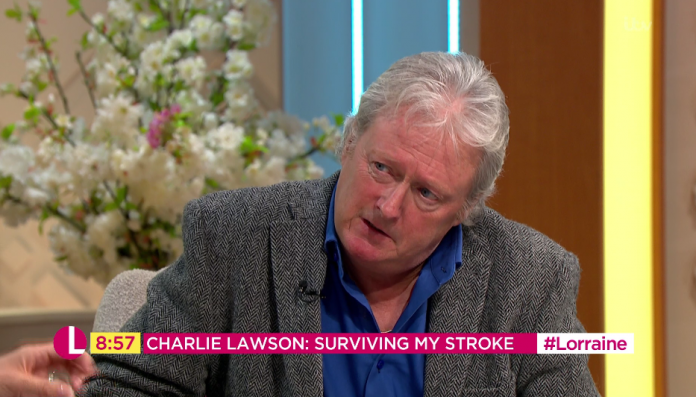 CORONATION Street legend Charles Lawson has confirmed “there are ideas” for Jim McDonald’s Weatherfield comeback after he opened up on the personal horror of his stroke.

The actor, who is celebrating 30 years since he first starred on the ITV soap, suffered a mini stroke while live on stage in October 2018.

The medical drama came just a few weeks after he returned to Coronation Street for a long-awaited comeback, as his bad boy character was released from jail.

He was part of a vast deception plotline to con former wife Liz, yet shortly after he delighted fans of the Cobbles, he was thrown into personal turmoil.

Charles opened up on his experiences on Tuesday’s Lorraine show, hosted by Christine Lampard.

He said of the mini-stroke, which happened during his stage show tour: “I had no idea.

“All of a sudden I was completely unaware.

“Everything turned blue and I didn’t know where I was, I had no idea.”

He said his partner Debbie was in the crowd and immediately noted something was wrong.

She headed to his dressing room to help him, and he admitted it was then: “I knew something was wrong.

“Two weeks before, I was diagnosed with exhaustion.”

Charles is now working with the Stroke Association to raise awareness of the signs of a stroke.

Yet now back on track, he also has his sights set on a Corrie comeback.

Confessing he had chatted to show producer Iain Macleod only yesterday, he said: “For the first time I have met a producer that keeps in contact with me.

“I was talking with him yesterday and there are ideas.

“But it’s not down to him, it’s down to the writers, so there could be a possibility.”

Talking about Jim’s relationship with ex wife Liz, played by Bev Callard, he added: “Those two are meant to be, it’s like Burton and Taylor.

“It’s very easy for me to go back – I have been living in Beverley’s pocket for a long time.”

Coronation Street fans all have the same complaint about racist Griff

EastEnders legend June Brown’s three children secretly appeared at her funeral – did you spot them?

Amanda Holden almost suffers Marilyn Monroe moment as she flashes her legs in a...

Meghan Markle news: Prince Harry & Duchess told to ‘get a life’ as comedian...