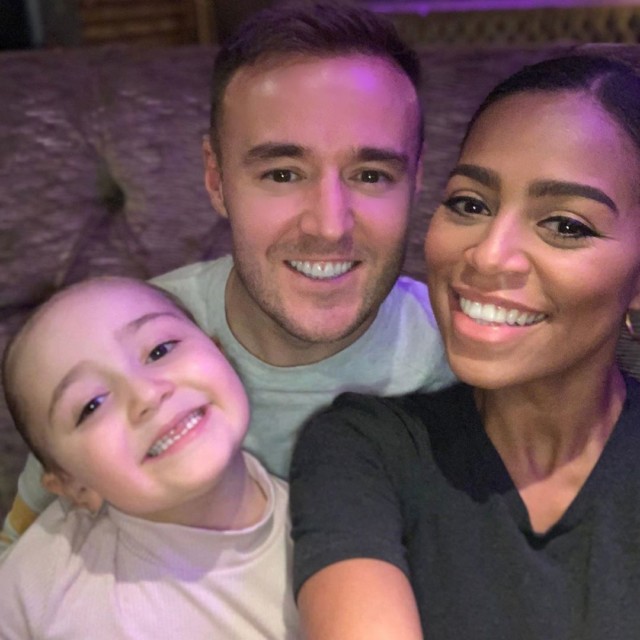 CORONATION Street’s Alan Halsall and Tisha Merry have shared the positives and negatives of their ‘blended’ family with his ex Lucy-Jo Hudson.

The TV pair spoke out about the ups and downs of co-parenting in their first joint interview.

ITV soap actor Alan spoke to OK! Magazine the about the difficulties that come with having an extended family.

Former Corrie actress Tisha is step-mum to Alan’s daughter Sienna, 6, who he shares custody with alongside ex wife Lucy-Jo who has since had another child with boyfriend Lewis Devine.

Lucy and Alan split in May 2018 after nine years of marriage together – but now successfully have a ‘blended’ family. The Tyrone actor said: “There’s always going to be ups and downs with a blended family.

“So long as Sienna comes first in all of it, that’s all that matters. Sienna’s got her mum and dad, and she’s also got Lewis and Tisha. It’s just a case that everybody loves her.

“Of course there will be differences of opinion; so long as we’re in that loving way when Sienna is around.

“We don’t have a great deal of communication, it’s only ever about Sienna and that’s all it ever needs to be.” Tisha hinted that the couple have considered having children. She said: “He’s such a good dad, he’s so caring and loving. I would love that for our child if we have one.”

Tisha, 27, said of her new life as a step mum: “In all honesty I’ve had a few times where I’ve thought ‘Oh my god, my life has changed so much’. It’s crazy but it’s changing for the better.

“When I first got together with Alan and I became a bigger part of Sienna’s life, my dad said ‘this will be the making of you’. “It’s tricky when you’ve gone from being a single girl with no one else to think about to someone with a family. It’s the best thing in the world but it can be really daunting.”

Lucy-Jo previously admitted co-parenting with the actor can be difficult as they sometimes clash over parenting styles.

She said: “The thing is, everybody who has a blended family knows it’s not easy. You can’t pretend that it is.

“And me and Alan sometimes have different views on raising Sienna so trying to co-parent can be challenging.

“It’s probably like that for a lot of blended families.”

Lucy and Alan have been co-parenting Sienna since their split in 2018. They initially called time on their marriage in March 2016 before rekindling their romance just months later.

Recently, Halsall appeared to take a pop at his ex Lucy-Jo’s man Lewis Devine after he called the Corrie star’s daughter Sienna his own.

Lewis gushed about the six-year-old following the birth of their son.

As part of a lengthy post after Lucy-Jo gave birth, he said: “Our Sienna is delighted and is already making the best big sister, just like I knew she would!”

Alan seemed to reference the comment as he posted on Instagram stories: “You’re welcome to keep the lying cheating one and call her your own! But not my daughter.”

Did you miss our previous article…
https://www.hellofaread.com/soap-opera/emmerdales-moira-dingle-discovers-a-huge-secret-tonight-ahead-of-her-hit-and-run-accident/

Who is Brianne Delcourt and when did the Dancing On Ice skater meet Kevin...

Prince Harry snubbed dinner with Charles and William after Meghan was banned from joining...

Tier 2 and 3 lockdown risk – The 15 places with soaring coronavirus rates...