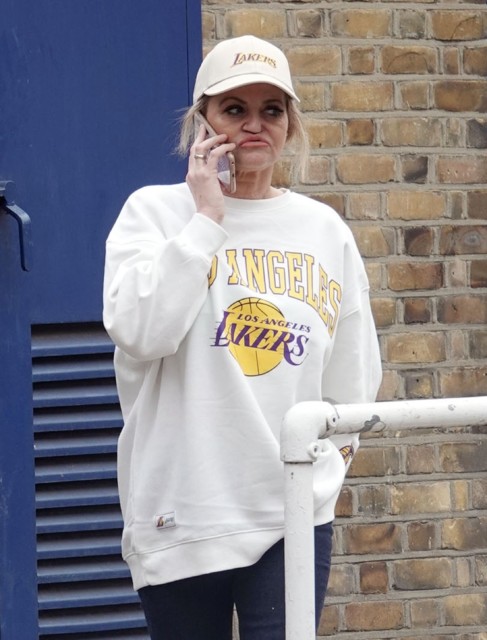 DANNIELLA Westbrook flashed a ring on her engagement finger as she visited her boyfriend in Pentonville prison.

It comes weeks after the EastEnders legend, 48, revealed that her mystery man is in jail.

The actress was recently spotted outside HM Pentonville, an English Category B men’s prison and young offender institution in Islington, North London.

Danniella was seen chatting on the phone outside the building in a cream oversized Lakers jumper and denim jeans.

She completed the look with a pair of white trainers and a matching Lakers cap.

Earlier this month Danniella revealed her new boyfriend is behind bars after she was linked to former Towie star Grace Andrew’s dad Terry. Danniella Westbrook poses for sexy selfie from bed after getting fillers

The pair went for an oysters and Champagne dinner at a swanky Essex restaurant Smiths of Ongar.

She shared a series of snaps from the date and even captioned the post: “Lunch time love”.

Fans were convinced that they were an item – so Danniella had to set the record straight.

The former Sam Mitchell actress confirmed that the pair are just friends and were on a working lunch before exploring a promo opportunity with a furniture brand later in the day.

She declared on Instagram: “This is not my boyfriend. It was a working lunch.

Danniella is yet to reveal her husband-to-be’s name.

Since then she has flashed her shiny engagement ring as she enjoyed a night out with pals.

The TV star looked in good spirits as she showed off the huge rock on her wedding finger.

She could be seen laughing and joking as she went about her evening, making sure to flash her engagement ring. Danniella – who played Sam in the BBC soap from 1990 until 2016 – famously begged ex husband Kevin Jenkins for a divorce on his birthday three years ago after splitting up five years earlier.

She and Kevin have daughter Jody, 20, together and she also has son Kai, 25, from a previous relationship with Robert Fernandez. Danniella has kept her new man’s identity a secret Could Scott Emberton be Carla Connor’s dad in Coronation Street?

Meghan Markle latest news LIVE – Duchess thanks Prince Harry for support as she...

Meghan Markle news: The Duchess had an ‘UNUSUAL’ role which ‘proved the Queen had...