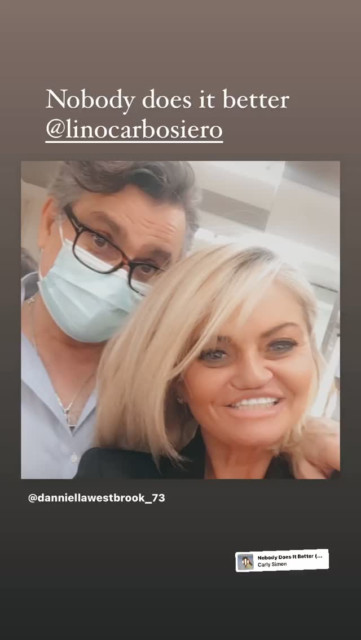 DANNIELLA Westbrook has revealed her glamorous hair transformation on her Instagram page.

The former EastEnders actress, 48, beamed in a new snap, which showed her ash blonde locks styled in a cute cropped style.

Danniella Westbrook has revealed her new hairdo in her latest Instagram snapThe former EastEnders actress, 48, has revamped her look of late

Her sleek straight locks brushed her shoulders, with a side fringe adding a trendy look.

Danniella posed alongside her hairdresser Lino Carbosiero as she gushed: “Nobody does it better.”

The actress has begun to re-vamp her look, with her fresh barnet following a new nose job.

She was spotted with a bandaged face just days ago, but has since revealed what was underneath. Danniella Westbrook reveals her jailbird lover will be released in months Looking fab in the back of a taxi, Danniella joked: “I can’t help but take the Mickey me

all these sultry insta posts are everywhere… So here’s one from me.

it’s only a bit of fun people

The former addict is undergoing operations to get her rib implanted in her face after drugs left her with crumbling bones and a collapsed jaw and cheekbone.

She went under the knife to help rebuild her face – and restore her shattered self-confidence.

Former EastEnders star Daniella has already had two of FIVE reconstructive operations at Liverpool’s Aintree Hospital, and one of the procedures will see part of one of her ribs inserted into her cheek. She underwent a similar operation in 2018.

The mum of two hopes improving her appearance will end the daily tirade of abuse she receives from online trolls that is destroying her self-esteem.

She believes her collapsed face was caused by cocaine laced with lethal animal de-wormer.

Danniella, 48, told HOAR’s Fabulous magazine: “I hate the way I look. I’m constantly made fun of, and trolled for it.

“People message me, saying, ‘You’re so ugly, you’re a junkie, you should just go and kill yourself’. I’ve also had messages saying they are glad I’m not coming back to EastEnders because no one wants me scaring their kids on the telly.

“I pretend I’m fine, always happy to bounce back and fight every battle. But it’s not the case inside, and feeling like this makes me really lonely.

Danniella, who took her first line of cocaine at 14 and is thought to have blown £250,000 on drugs, is adamant she is not undergoing surgery to silence the trolls.

She says: “After I relapsed (in 2014), for years I didn’t care what I looked like because I was on a crazy whirlwind of destruction.

“But I’ve got to a point where looking like this upsets me, so I’m going to make a change — not because of what others think but so I can be happy with the way I am. Katie Price, pull yourself together for your kids, says Piers Morgan “It will change the way I look but also help my breathing and sinus issues.

“So it’s about my health as well. I’ll be in for the big surgery, which is the bone replacement, at the end of April. And then the final operation to tweak and finish the nose is at the end of May.” She recently showed off her new nose after surgery

EastEnders’ Shane Richie and Patsy Palmer break down in tears live on air in...

Pay cut for millions as real wages fall by record 3%