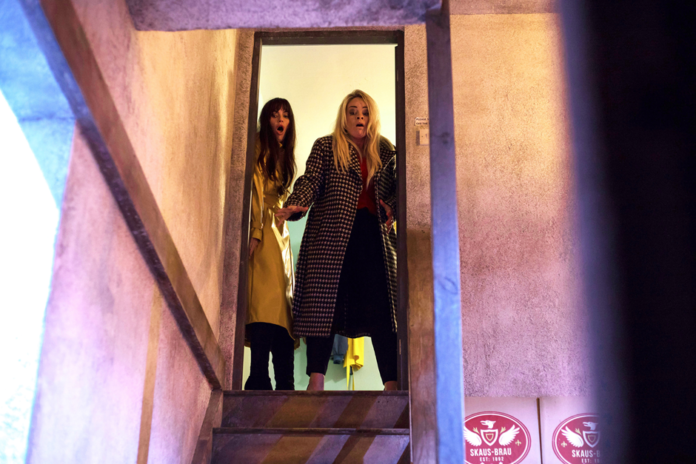 HOLLYOAKS cast members are devastated to say goodbye to Jude Monk McGowan after his character Liam Donovan was killed off tonight.

The actor – who played gangster Liam in the Channel 4 soap – bid farewell to the soap as Liam was murdered by his own sister.

Tamara and Jennifer have paid tribute to Jude

Now the actress who plays her, Tamara Wall, has said: “I am gutted!! Me and Jude have the nicest relationship. He is one of the nicest and most genuine person I know, and he’s a brilliant actor, and a joy to work with.”

Jennifer Metcalfe added: “I miss him already! My god I have enjoyed working with him.

“Since coming back off maternity leave, nearly two years ago, him and David have just been my little security blankets. They have always been there for me when I’ve not slept too much. They always get me a coffee, or just drag me, and keep me going!

“I’m going to miss him dearly! I’ve made a lovely friend there. He’s such a cool guy, and he’s so talented. When we do scenes together, I love what he brings out in me, and I’ve got a massive thank you to him for that.” Liam was finally killed by his own sister Grace

Fans were in shock after Grace Black murdered her brother Liam tonight.

The gangster – who is played by actress Tamara Wall in the Channel 4 soap – had finally had enough of Liam’s revenge schemes and so when he tried to kill her, she ended him instead.

Scheming Liam has been slowly losing the plot for months and has become obsessed with destroying the people he blames for the misfortune in his life.

Viewers watched as he lured exes Mercedes McQueen and James Nightingale to the pub alongside Grace Black and Maxine Minniver for his devils’ dinner party. During the day he exposed Grace and James as being Mercedes’ true shooters leaving her horrified before giving her his gun and an ultimatum – shoot Grace and everyone else walks free.

Warren Fox then broke in to save them and gave most of them a chance to escape but at the last moment Liam grabbed Mercedes and was about to kill her before Grace punched him away.

Grabbing his tie she stopped him from falling to his death into the cellar – but only for a second.

“You have gone too far, you have to stop. I’m not a Donovan – I’m a Black,” she said as she let go off his tie and sent him plummeting to his death.

Confirming he was dead, Mercedes told a horrified Maxine and Courtney: “He’s dead.”

Fans were in shock at the twist.

One wrote: “No way! Not our Liam!!#Hollyoaks”

A second said: “if liam donovan is dead then so am i x #Hollyoaks”

Queen Elizabeth news – Camilla’s popularity absolutely ROCKETS after Her Majesty declares she WILL...

Adele Silva on chances of Emmerdale return as she shares intimate secrets behind playing...

Denise Van Outen admits it took two people to get her into her Masked...