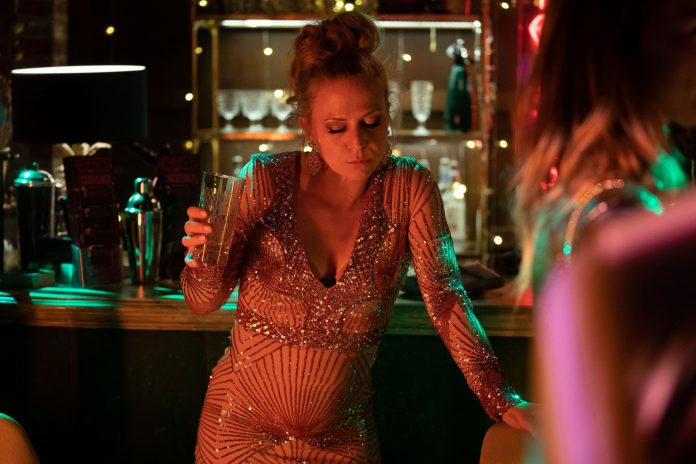 The Queen Vic landlady – who is played by actress Kellie Bright in the BBC soap – will hit the bottle hard over the festive period, leading to a dramatic comedown that will change her forever.

Executive producer Jon Sen told HOAR Online: “We always wanted to do a story that shows the tragedy of alcoholism and we’ve seen Lindas story evolve over the last few months.

“But we wanted to really get into the heart of what it is to be so enslaved into alcohol, the cons of alcohol abuse, and the tragedy of it all.

“The shame, and the regret, and the humiliation – and yes she finds escape in it, but at the same time it’s damaging herself, her family, her friends.

“We really wanted to get into the skin of it, so we have this very unique episode for our New Year’s Eve where we tell it completely from Linda’s point of view as she starts New Years Eve amongst all the over revellers, who are out there to get hammered.

Soap boss Kate Oates added: “I think that it’s been nice to see Lindas alcoholism build quite truthfully because it’s a combination of life problems.

“She’s got issues within the family, Mick went to prison, she’s got all the hangovers from everything happened with Dean, she’s got a new diagnosis with Ollie in terms of autism which is another challenge for her.

“She’s not quite sure how to handle that and she’s been self medicating – the wine got earlier and earlier and it’s suddenly become overwhelming.”

She added: “It’s a bit of a homage really to Den and Angie, there’s been a classic tradition of drinking in toxic relationships within that pub but the cast are very different because, fundamentally, Mick adores his wife.

“What we are going to see is ultimately how addiction gets in the way of their relationship in a way that Linda is choosing alcohol above her family.

“Thats going to have huge ramifications in terms of: ‘can they stay together, will they be able to co-parent Ollie, is this going to break them up permanently?’

“And with the arrival of Lee, both of them are forced to ask some really challenging questions.”

The episode will air on New Years Eve as Linda struggles to cope with the events of Christmas Day.

EastEnders airs on Christmas Day at 9.30pm on BBC One

Coronation Street’s Colson J Smith slimmer than ever as he hits the gym for...