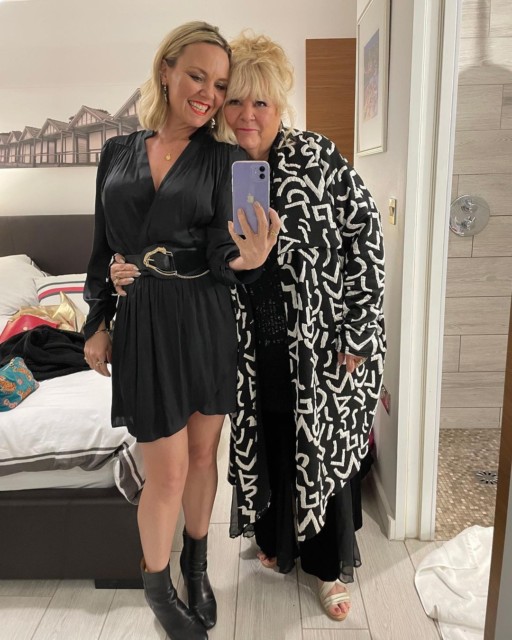 It comes after she had fans in hysterics after her Children in Need sketch where her character Janine went on a date with Corrie’s Steve McDonald.

Charlie, 40, oozed glam in a black wrap dress that showed off her slim figure.

She glammed up her little black dress with some cowboy boots and a slick of red lippy.

Her mum Rowenna looked chic in a long black dress, with a black and white winter jacket over it.

Charlie captioned the shot: “Mamma Roe. Out out with my one and only. @roe_brooks00.”

One wrote: “You both look fab have a lovely night.”

Another said: “Love you both. Looking fabulous,” while a third chimed in: “WOW.”

Children In Need viewers were in hysterics as EastEnders’ Janine joked about killing husbands on a date with Corrie’s Steve McDonald.

The EastEnders villain teamed up with the Coronation Street lothario, 47, for an epic First Dates sketch on BBC1’s Children in Need tonight.

Fans couldn’t believe it when Janine, ended up on a date with Steve, played by Simon Gregson, after the host put them together by accident.

The soap legends took the opportunity to drop in their famous storylines as they got to know each other.

The highlight was when Janine joked about killing her husbands – reminding fans of when she famously pushed her husband Barry off a cliff to his death.

Simon asked Janine if she had been married, to which she replied: “Four times. I’ve only killed two of them,” before cackling with laugher.

Soap fans took to Twitter to praise the sketch, where Steve also dropped in that he had had 7 wives, causing Janine to almost choke on her vodka tonic.

One wrote: “Simon Gregson and Charlie Brooks are brilliant in this.”

Janine joked about killing her husbands on a date with Steve Strictly fans are all saying the same thing as Kym Marsh is eliminated after...

EastEnders fans all have the same complaint about Sharon Watts

Protest marches could be limited to six people in areas with high coronavirus infection...