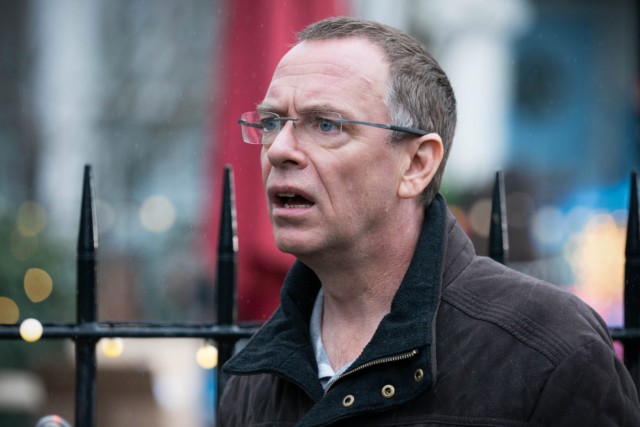 IAN Beale is targeted again tonight as his attacker reveals their identity in an explosive Christmas Day episode of EastEnders.

Scheming businessman Ian – who is played by actor Adam Woodyatt – was left for dead earlier this month in the Queen Vic as the soap confirmed the eight suspects in his attack.

Ian is attacked again this Christmas

The pub owner has been left cowering in fear in the countdown to Christmas – with another death threat coming in last night’s episode.

He was left terrified when a report of his Christmas Day death flashed up at the community event in the Square.

Someone wants Ian dead – but who?

However with everything Ian has done including faking another attack to garner sympathy from his family, will anyone help him?

Things don’t get much better for Ian tonight on Christmas Day as he storms over and accuses Ben of trying to kill him.

Later, Ian grows terrified at the pub when he realises there’s a figure in the shadows.

But who is it – and are they his attacker?

In tonight’s 55-minute long episode Ian’s attacker will be finally revealed – as they make another attempt on Ian’s life.

But will they succeed?

As Christmas Day comes to an end, one Walford resident makes a lethal move.

Is Ian Beale about to have his last breath?

Everyone should stay at HOME this New Year’s Eve to stop Covid spread, Hancock...

Queen to celebrate Prince Philip’s life after sitting alone at his funeral as she...

GCSEs and A-levels in chaos with PARENTS forced to train to invigilate exams over...