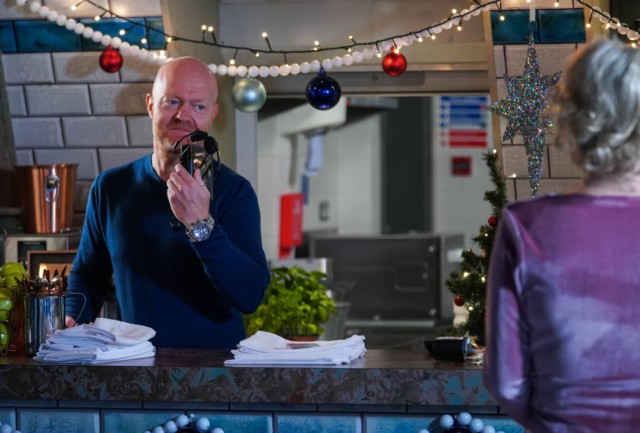 MICK Carter struggles to cope with his abuse memories as Linda’s affair with Max intensifies this Christmas in EastEnders.

Mick was abused by his care worker Katy Lewis – who recently turned up in the Square – when he was put in care as a child.

Max goes to great lengths to win Linda over

Things escalate quickly in the countdown to Christmas as Max grows determined to start a new life with Linda and goes to great lengths to win her over.

Linda tries to explain to Mick how she’s been feeling in recent weeks, but Mick barely responds.

Linda grabs a bottle of whiskey and tries to provoke a reaction and get him to fight for her, but it’s clear Mick has no fight left.

Linda is left reeling, furious with Mick and mulling over Max’s offer. Linda is gutted when Mick barely responds to her

Will Linda leave Mick for Max?

Things aren’t looking promising for the couple on Christmas Day, as Mick and Ollie have lunch with Shirley, Tina, Gray and his kids.

And when Tina gives Mick an old photograph of them and Katy at the care home, it all kicks off.

Will Mick open up to Linda before it’s too late?

Speaking about whether Linda is ready to take things to the next level with Max, actress Kellie Bright – who plays Linda in the BBC soap – revealed: “She’s not at all in that place. I think she feels like she’s on a rollercoaster with Max, and she doesn’t really know how to get off it, or how to slow it down.

“She’s desperate for Mick to just turn around and go – what the hell are you doing? I want you back. But he doesn’t do any of that. And I think that’s what’s so hard. In the end she thinks what am I waiting for? He doesn’t want me.”

Speaking about Linda’s oblivion to Mick’s struggles, Kellie added: “She certainly wouldn’t ever guess that what is going on with him is actually going on.

“I think she thinks it’s the fact that he isn’t in The Vic, out of a job, plus he’s on this medication for his anxiety.”

Zara McDermott sizzles as she squeezes into tiny red lingerie after reuniting with Sam...

Meghan and Harry latest – Royal couple ‘IGNORING haters and feel stronger than ever...

Rishi Sunak vows to do whatever it takes to help Ukraine’s President Zelensky defeat...