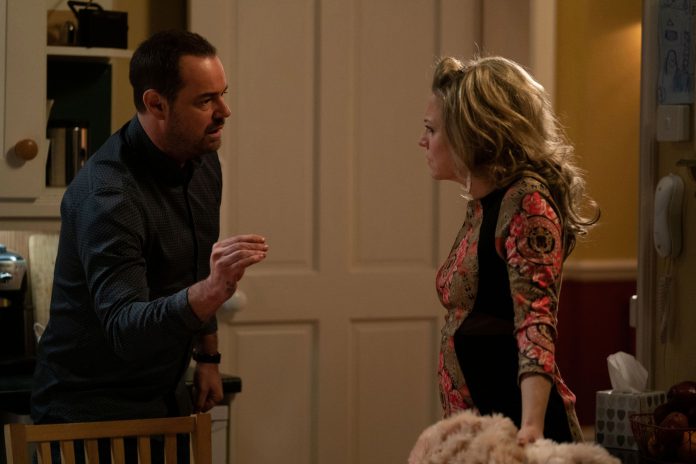 LINDA Carter surprised Mick with divorce papers tonight after coming face to face with an estate agent valuing the pub in EastEnders.

The landlady – who is played by actress Kellie Bright in the BBC One soap – is embroiled in a dark alcoholism storyline that is threatening to rip her family apart but will Linda and Mick actually get divorced?

Why did Linda serve Mick with divorce papers in EastEnders?

EastEnders viewers know that a string of traumatic events has taken its toll on Linda and that shes rapidly developed a serious addiction to booze.

Fans will remember that the landlady was raped by her brother-in-law back in 2014 and was later diagnosed with cancer.

She also appeared to suffer heartbreak when her son Ollie was diagnosed with autism.

Since then, Linda has been arrested for drink driving and ended up spending Christmas Day in hospital after passing out drunk in the freezing cold.

Fans watched in horror as the alcoholic then spiralled further when social services started sniffing around Ollie after he told his teachers at school he wasnt happy at home.

The disastrous string of events has pushed Mick and Linda further away from one another.

Last night, a drunk Linda savagely hit back at Mick when he tried to discourage her from necking the booze.

Viewers were horrified as she threw wine all over her husband and ruined Ollies drawings in the process.

And tonight, Mick appeared to finally have had enough as he had an estate agent come round to value the pub.

But when Linda stumbled into the scene, she was furious and stormed out to get legal advice.

She later returned and dropped a bombshell on Mick as she thrust divorce papers in his face.

Mick has stuck by Linda through thick and thin in EastEnders

Do Linda and Mick divorce in EastEnders?

So far, viewers have watched Mick stick by Linda, despite the abuse he has received and it’s possible he’ll help her battle her booze problem until the bitter end.

However, it’s not yet clear whether Mick gives up on his marriage to Linda and fans will have to tune in to find out.

EastEnders has confirmed that Mick and Linda will host a party in the third week of February after winning the Pub of the Year contest.

The week – which will mark the show’s 35th anniversary – will focus on 24 hours as the party gets underway.

Filming pics have shown a drunk Linda going wild on top of the tables as well as Mick ending up overboard.

If the struggling lovebirds haven’t divorced before then, it’s likely the party will be the final straw…

Jeremy Corbyn and Boris Johnsons awkward conversation as they walk together at the Queens...

Love Island’s Paige reveals Finn is ‘desperate’ for a baby and says they haven’t...