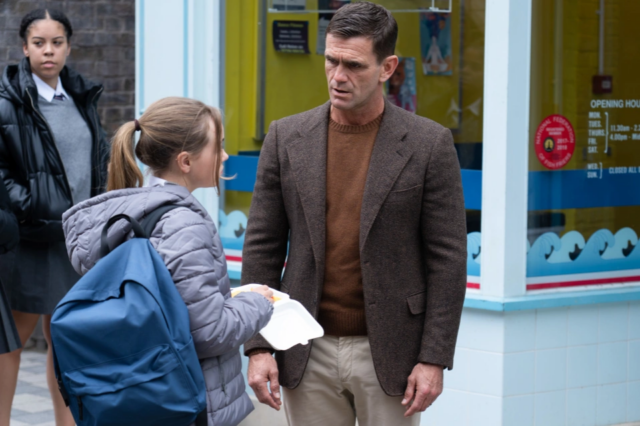 EASTENDERS fans are all saying the same thing after Jack Branning spiralled out of control tonight.

The detective – who is played by actor Scott Maslen in the BBC soap – discovered his daughter Amy Mitchell has been self-harming this week.

Jack is very worried about his daughter

Amy has been struggling with self harming

And it’s safe to say he isn’t coping very well.

But instead of listening to his daughter and trying to help her, Jack has spiralled out of control.

In tonight’s episode he packed Amy off to school before ransacking her bedroom.

He found the items she was self-harming with, and then practically threw himself into the school to demand that Amy is monitored at all times.

But with waiting lists and delays, it could take months for Amy to receive any help through the school.

And for Jack that was too much.

He went to the Vic and began to drown his sorrows.

The bar staff called Denise as they realised something was very wrong with him, but she didn’t get there in time to stop him from violently lashing out.

As Howie tried to strike up conversation with Jack, the police officer raged about Howie’s son going near Amy.

Howie hit back, telling Jack his behaviour was out of order, but then Jack grabbed him before punching him and laying him out.

Denise ran in just in time to drag him home but as she tried to get through to him to help Amy.

“It’s not up to you,” Jack screamed back.

“She’s not your daughter, she’s mine.”

Viewers are disgusted with his behaviour and all had the same complaint.

One wrote: “Jack’s going to lose everything if he carries on. He’s already losing Amy for not understanding her. He’ll lose Denise eventually and now his job is on the line for the second time.

A second said: “Crikey Jack your worried I no but that’s not the way Amy needs ya not you ending up in jail

Another added: “Jack has pushed Amy away for good now he’s done what he has done. He needs to learn how to control his anger and needs to speak to Amy properly without blaming other people. None of this Denzel’s fault.

Labour stay silent on which crucial road upgrades would be axed to fund Jeremy...

Budget includes plan for 4,000 miles of new roads and £2.5bn on potholes