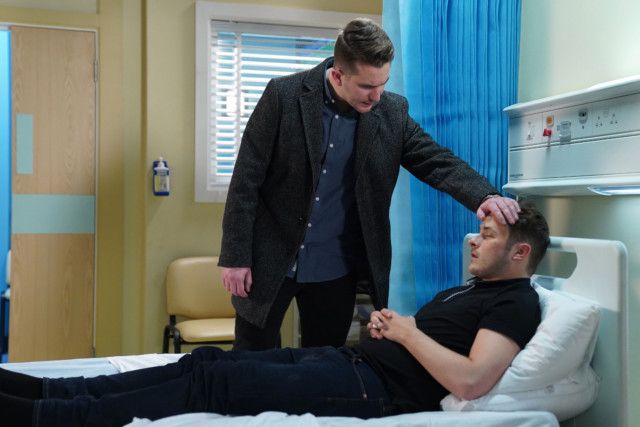 EASTENDERS fans are convinced Ben Mitchell has caught coronavirus after he got a mystery fever before his ear operation on last night’s episode.

BBC viewers watched as Ben’s boyfriend Callum and dad Phil were left devastated when the doctor refused to proceed with his operation due to his temperature.

While Callum was concerned for his other half, his father Phil was upset for a whole other reason as the delay would stop Ben helping him with his dangerous business plan to buy The Vic.

Upset that he couldn’t get the operation, Ben fumed at Kathy and explained he caught his temperature off daughter Lexi, who had to stay home from school sick.

And now soap fans believe that the character has contracted deadly COVID-19, which has claimed the lives of 35,023 Britons to date. Ben fumed at Kathy and explained he caught his fever off daughter lexi, who had to stay off school ill

“Ben’s got Corona!! Shut the show down #EastEnders,” another wrote. “Bens got the #Corona #Eastenders”.

A concerned viewer posted: “Ben you might have corona mate. #Eastenders”.

“Oh my has @BenderMitchell_ got the corona? #EastEnders,” another questioned. “Ben’s got corona #eastenders”.

Fans may be onto something as show bosses previously said that future episodes will reference the ongoing coronavirus pandemic but not as a major storyline.

Has Ben got Corona?

Ben's got Corona!! Shut the show down #EastEnders

Bens got the #Corona #Eastenders

Oh my ‘as @BenderMitchell_ got the corona? #EastEnders

Has Ben got Corona? #eastenders

Currently the BBC drama is making official plans to return to filming in June, however the government’s social-distancing guidelines will complicate filming.

According to DigitalSpy, producers and the BBC are in the very early stages of working out what cast and crew will be physically able to do on set.

This includes soap actors reportedly getting make-up tutorials by professionals to get camera-ready between takes while adhering to government guidelines.

Inside the Royal Vault where Prince Philip will be buried until he’s joined by...