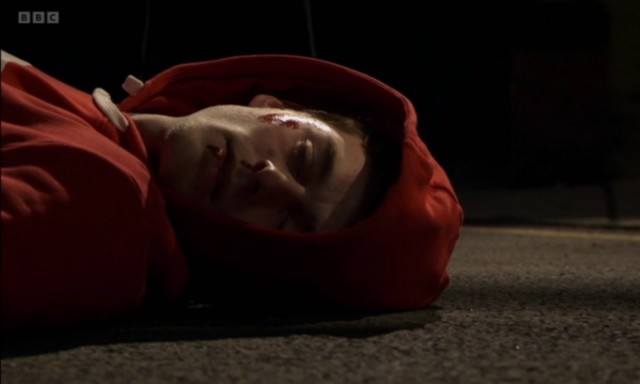 The mechanic – who is played by actor Max Bowden in the BBC soap – has been carrying out revenge attacks on homophobes for months now.

And in tonight’s episode he got one delivered to his doorstep when he overheard the man mocking Ben’s husband Callum.

Ben was dragged away by Lewis, but kept stewing in his rage.

But after the homophobe kept coming back to spread more poison, Ben decided to act.

It took him a long time of waiting – and several cocktails – but when Ben spotted the man passing again he followed. Chasing him into an alley, Ben brutally attacked the man.

But when he gave him another kicking and turned his body over Ben was horrified to see that he hadn’t attacked the homophobe.

Instead he had just attacked his nephew Peter Beale who was also wearing a red hoody.

Peter lay lifeless on the ground covered in blood.

EastEnders fans are terrified Ben has killed him.

One wrote: “Ben just attacked his own nephew!!! He didn’t even see his face and decided to attack him because he’s wearing a red jumper. #EastEnders”

A second said: “Ben might have just killed his own family member because of his stupid uncontrollable rage. #EastEnders”

Another added: “They intentionally chose Peter so that Kathy tells Ben to do one, leaving him even more isolated.” Speaker unveils his own new 12-year-old single malt whisky to go on sale this...

Boris Johnson could stay as an MP until the next election, pals say