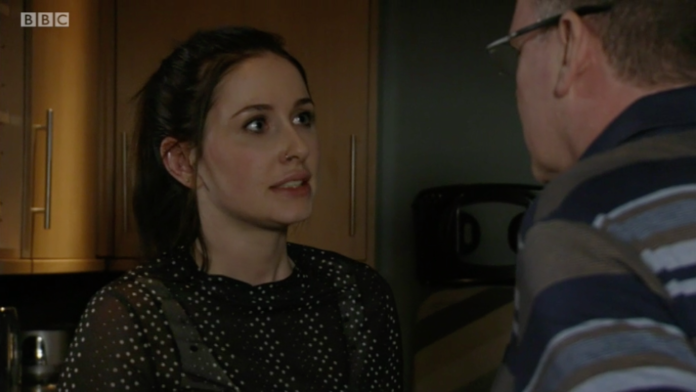 The businessman – who is played by actor Adam Woodyatt in the BBC soap – was being blackmailed by Dotty over a voicemail she had of Dennis Mitchell begging to be let out of a locked room on the boat before he died.

Viewers know Ian locked Dennis in the room before the crash and returned too late to save him from drowning – but only Dotty knows what he did.

She had been blackmailing him to buy her The Arches, but after Ian destroyed the evidence – Dotty decided to just destroy Ian instead.

After he warned her tonight that she wouldn’t be getting the mechanics garage, she said: “Fine, don’t want it. it’s not about that anymore.

“How you can sit there day after day looking her in the eye. That’s a special kind of twisted. “Sharon might not be ready to hear the truth yet but when she’s strong enough I’m going to make sure she knows exactly what kind of man you are.

“And until then I’ll keep reminding you exactly what you did. Get used to having me around Ian, because I’m not going anywhere.”

The look on Ian’s face had fans convinced he was going to kill Dotty to keep his shocking secret.

One wrote: “You know if Ian kills Dotty I’ll be totally okay with that #EastEnders”

A second said: “Dotty don’t eat anything Ian cooks, he might try to poison you…Grimacing face#EastEnders”

Another added: “I can see Ian getting desperate enough to hire someone to attack Dotty to scare and intimidate her #Eastenders”

Silent Hill games apparently found ahead of official announcements with three rumoured to be...