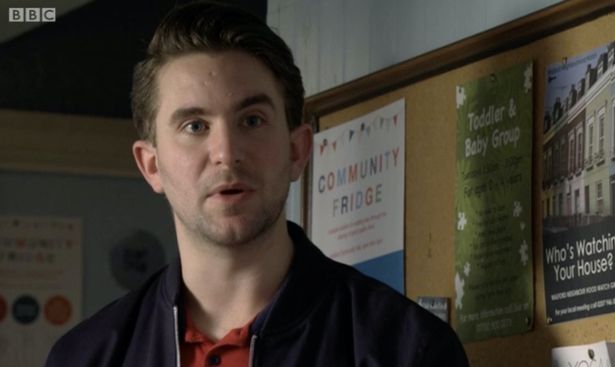 WATFORD’S resident serial killer Gray Atkins murdered again on Monday evening by pushing Kush Kazemi in front of a train – and fans reckon he already has his next victim in his sights.

Policeman Callum raised his suspicions in the cafe with Gray

Gray (Toby Alexander Smith) killed his third victim, Kush Kazemi (Davood Ghadami), this week, pushing him into an oncoming tube after he tried to run away with Whitney Dean.

The lawyer has murdered twice before, killing his wife Chantelle Atkins and Tina Carter too.

The night after Kush’s death, policeman Callum (Tony Clay), spoke to Gray in the cafe about the police report of the market trader’s mysterious death.

Once Callum shared his doubts about the investigation into his death, viewers became convinced he would be Gray’s next victim. Gray Atkins drinks away his murderous mind at the Queen Vic Some fans guessed that Callum’s investigation into Kush’s murder would backfire and cost him his life.

“Gray setting up his next victim… watch your back Callum!,” added a second.

And a third agreed: “The amount of plot holes in this story is ridiculous. It literally makes no sense.

“And I love Callum but that scene was so clumsily written. They also better not be setting this up for him to be Gray’s next victim! I hate this.” While a fourth exclaimed: “GRAY STAY AWAY FROM CALLUM.”

During their conversation, Callum made it clear he believed something sinister was going on, as he reflected on Kush’s happiness with Whitney.

“Off to start a new life together, apparently. I mean, she said that they were happy, excited,” he said. Others have been suspicious of Gray Atkins behaviour The psycho shows no signs of stopping killing

Gray then prodded the policeman for information, asking: “Do they know what happened?”

He said: “Yeah, you’re probably one of the few who can understand. I know you two must have got close, what with the kids and everything. “I’m just really glad that she’s got you in her corner. Someone who gets it, who cares.”

Does Callum know Gray Atkins is behind Kush’s murder, and if so, is he putting his life at risk?

EastEnders airs on Mondays and Fridays at 8pm, and on Tuesdays and Thursdays at 7.30pm.

Did you miss our previous article…
https://www.hellofaread.com/soap-opera/coronation-street-spoilers-jenny-connor-realises-sharon-bentley-is-up-to-no-good/

Coronation Street spoilers: Maria Connor terrified as she gets death threats – and the...