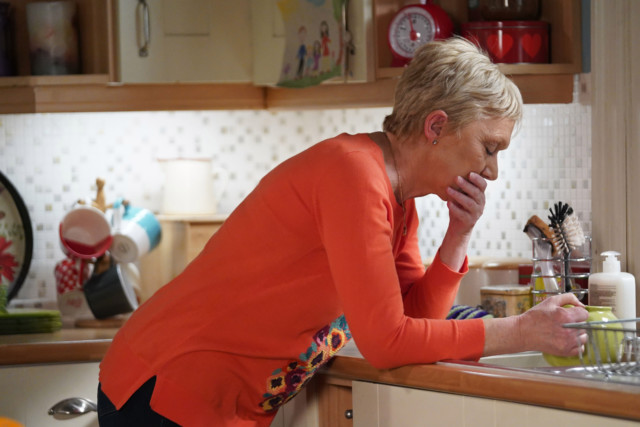 EASTENDERS fans fear that Kush and Shirley will KILL Jean after they gave her an overdose of prescription pills in tonight’s episode.

The pair have both grown increasingly concerned about the character’s erratic behaviour in recent weeks, with Kush discovering that she hadn’t been taking her medication since partner Daniel died.

Shirley got involved today after seeing the police entering the Slater household and learning that Jean had called them 46 times over Whitney’s disappearance – even after she had returned to Walford safely.

Shirley was even more worried when her pal kicked off at Whitney in a restaurant before disappearing – excitedly returning later that afternoon with armfuls of Easter eggs.

Unimpressed, the Carter matriarch confronted Kush on why he hasn’t been helping her, with the hunk admitting that he has started sneaking her pills into her food and drink.

When Shirley pointed out that Jean was still behind on her dosage, Kush replied: “So maybe we should top her up.” Kush has started sneaking her pills into her food and drink Fans fear that Jean will DIE because of Kush and Shirley

Clearly conflicted, Shirley hit back: “I don’t know if it works like that!” before offering to go and talk to her.

Emotional Kush explained: “Kat is not here and I can not look after the kids, manage the stall, and deal with Jean on my own.

“It’s way past the time for talking.”

After a dramatic few moments, Shirley was seen fighting back tears as she reached for the pills – crushing more than Jean’s recommended dosage to give to her that evening. Viewers at home were horrified by the scene, with many fearing that they will end up accidentally killing the much-loved character off.

One wrote: “How about calling Jean’s doctor.”

Another shared: “Finally someone will help Kush. Only I don’t think overdosing Jean is the right answer.”

A third said: “Kush and Shirley about to murder Jean with all that oh my god.”

Jean suffers from bipolar disorder and has been shown to become erratic and reckless when she is off her medication in the past.

She also recently got the all-clear from her cancer diagnosis after a gruelling battle, but was left devastated when partner Daniel passed away from the disease not long after.

GMB’s Alex Beresford forced to apologise to to the Queen as he’s slated by...

Month-long delay to ending lockdown will cost £1billion a week and risk 300,000 jobs