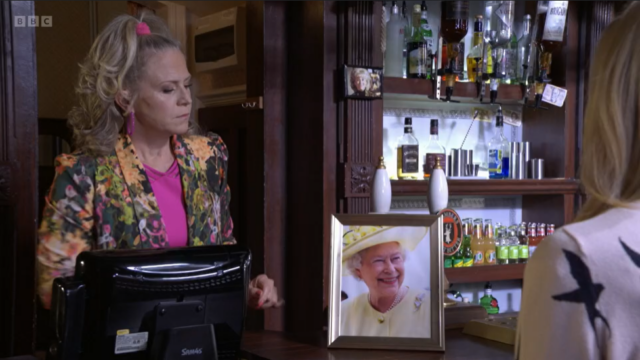 EASTNEDERS fans have been left floored after discovering just how old Kathy Beale is during a tribute to the Queen.

A picture of The Queen was placed on the bar as Linda, Denise and Kathy all remembered her fondly

As the nation mourns the loss of the monarch, soap bosses have been finding ways to pay tribute to Queen Elizabeth II.

And during Monday night’s visit to Walford viewers watched on as a tribute was held in the Queen Vic pub.

Before the iconic opening titles rolled, the show opened as Linda Carter, Kathy Beale and Denise Fox gathered as a photo of the Queen was displayed on the bar.

“God bless her,” Kathy could be heard saying.

Meanwhile Denise said: “She’s been here our whole lives, it’s like everything we’ve ever known.”

But viewers were shocked when Kathy declared she was three years old when the Queen was coronated – making her 73 years of age.

“I wish I could remember the coronation, but, well, I’ve got other people’s memories,” she told Linda and Denise.

Fans immediately took to social media to air their shock at Kathy’s age – and said she doesn’t look 70.

“Out of everything I’ve heard this past week, the thing I’m struggling most with is that Kathy Beale off Eastenders is 73,” one fan said.

“I’m sorry, Kathy in #Eastenders just said she was 3 when the Queen had her coronation? Kathy is 73?! I had her at early to mid 60s,” said another.

Sorry, are we supposed to believe that Kathy is 73???? #Eastenders

I just watched an episode of Eastenders for the first time in 5 years. The actors have aged normally, except Kathy Beale, who still hasn't aged a day!?

“Thank you ma’am, from all of us,” Linda then said as the scene closed.

EastEnders airs on BBC One and iPlayer. 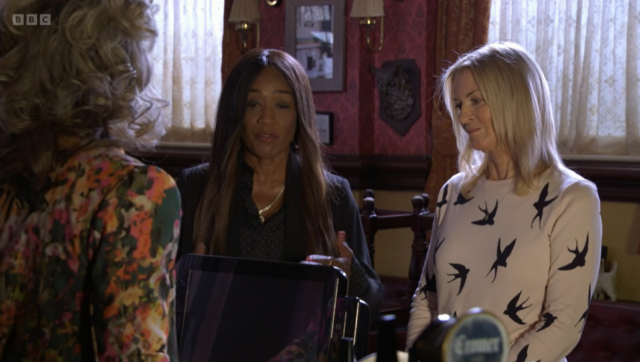 The heart-warming scene happened before the episode titles rolled

Kathy shocked viewers when she revealed her true age

Is Strictlys Emma Barton leaving EastEnders, is she married and does she have kids?

I bought a £569 iPad on Amazon but what the courier delivered instead left...