EASTENDERS fans have been left floored after Mick Carter stepped up his engagement to Janine – and fear the worst.

The landlord – played by Danny Dyer – is expecting a baby with girlfriend Janine (Charlie Brooks), and got down on one knee a few weeks ago, minus a ring. 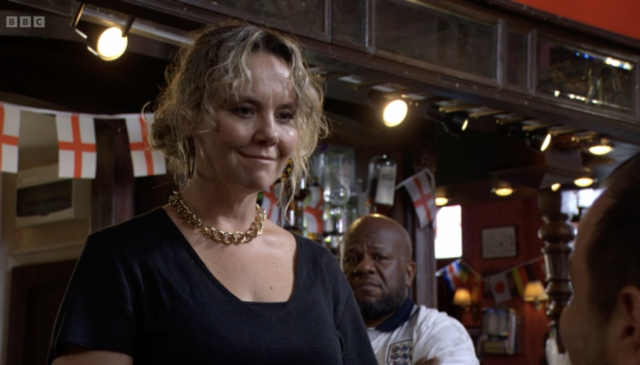 The couple have had a rollercoaster time since and tonight’s episode opened with Janine declaring the wedding was off, before heading to her baby scan alone.

While she was gone, Mick’s ex-wife Linda (Kellie Bright) encouraged Mick to get Janine an engagement ring, despite the obvious feelings she still has for him.

Mick followed his ex’s advice and later in the pub, got down on one knee and proposed to Janine again, this time with a ring.

She said yes and as the couple hugged and celebrated, Linda excused herself and fought back tears in the passageway of The Vic.

Later, Janine noticed a framed photo of her baby scan in the living room, and her daughter revealed Linda had done it.

After she told Mick about it, he went downstairs and thanked Linda before apologising for not being there for her in the past like she was being for him now.

The pair shared a smile before Linda left for the evening, and Mick’s mum Linda soon had a word with her son about it all.

She said: “I’ve seen it, having cosy little chats in the corner, giving each other sneaky looks.”

Mick replied: “She’s been helping me, we’re in a good place.”

His mum said: “Exactly, you and Linda are still mooning over each other, even after everything that’s happened.”

Mick said she was inventing things that didn’t exist but his mum shot back: “Alright you tell me. If Janine wasn’t pregnant, would you still marry her.”

Mick insisted he would be Shirley was having none of it and declared it was a “shot gun wedding” and Janine had “trapped” him.

Branding Janine a “psychopath”, she added: “You need to make a choice Mick, coz there’s only one way this is going to end and that’s in disaster”.

EastEnders viewers had a sense of foreboding about her words, especially because of Danny’s impending departure from the soap.

Taking to Twitter, one wrote: “You can tell Mick doesn’t even really like Janine and acting out of duty.”

Another added: “Mick’s in denial over his feelings he’s like piggy in the middle Janine on one side Linda on the other.”

A third tweeted: “That mick and janine proposal wasn’t as cringy as i thought it was going to be.”

EastEnders is available on BBC iPlayer.

Strictly fans all say the same about Claudia Winkleman’s outfit – but did you...

Polling station pencils: Why don’t we use pens and should I take my own?