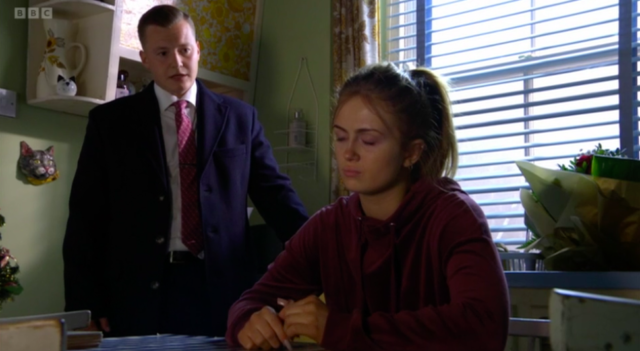 In tonight’s episode, Keegan (played by Zack Morris) was left with a collapsed lung after being beaten up by Aaron (Charlie Wernham) far-right pals.

The episode began with his mum Karen Butcher (Lorraine Stanley) finding out that the reason Keegan got battered was that his ex Tiffany (Maise Smith) shared a far-right petition online.

Before Keegan was beaten up, he entered a verbal altercation with Tiffany’s new boyfriend and friends over the petition.

On the way home from the Queen Vic some of the lads beat him with baseball bats. Keegan now needs surgery for his lung – and it looks like he may need a doner.

Tiffany is shocked to hear the news but believes Aaron when he says he and his pals have nothing to do with it.

After she visits an unconscious Keegan in the hospital, she bumps into Karen at his bedside who banishes her from Keegan and the family’s lives.

Karen says: “Get away from my son. you’ve got five seconds to get out of my sight or you will be in the ward next door.”

She tells Tiffany it’s over between her and Keegan: “I’m sorry he ever set eyes on you. Look what you’ve done to my boy all for a few likes?

Karen continued: “From now on you stay out of life, out of my sight, he’s better of without you.”

Tiffany leaves in tears to return home where her boyfriend Aaron is waiting in the kitchen.

At first, Tiffany tells Aaron to leave her alone as he hands her a bouquet of flowers but she quickly changes her tune and is quickly wrapped around his finger again.

Aaron says: “Tiff, I’m really sorry. Maybe deep down I’m just jealous because I know you two [Tiffany and Keegan] had something special.

“I’m not the soppy sort but I wouldn’t be standing here now if I didn’t think we could have something special too. I like you, a lot. I can’t turn the clock back but we can at least try and move forward, can’t we?”

Tiffany then looks up at him, he says: “Why don’t we do lunch tomorrow and we. can talk things through, yeah?”

She smiles before nodding in agreement and it has left viewers furious.

Writing on Twitter, one said: “Aaron really is so desperate. I wish she could just ditch Aaron, he’s a piece of work.”

“Tiff why are you still listening to him??” asked a third.

And a fourth said: “Don’t trust him Tiff!”

Aaron, who is rumoured to be behind a terrorist attack at Christmas, doesn’t appear to be going anywhere soon. Did you miss our previous article…
https://www.hellofaread.com/soap-opera/strictly-come-dancing-2021-rose-ayling-elliss-dance-partner-giovanni-secretly-dating-celeb-after-maura-higgins-split/

Pret a Manger tells thousands of staff to cut their hours by a fifth...

BGT’s Amanda Holden frolics in a field after upsetting fans with dress for show’s...