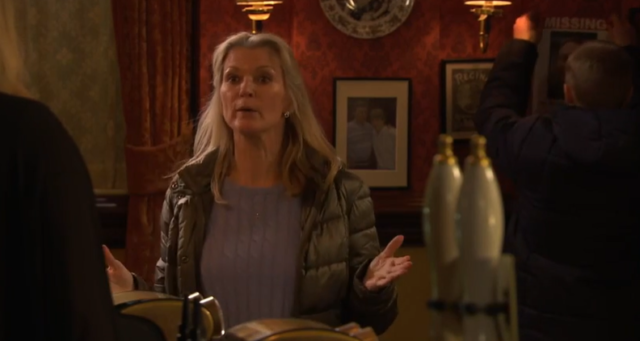 EASTENDERS fans were left gobsmacked as Max exposed Sharon for trying to kill Ian – in front of the entire pub.

Kathy and Bobby put posters up of Ian

Max Branning grows determined to discover the truth and when he spots police talking to Bobby, he asks if there’s any news on Ian.

Linda then tells Sharon that Max is on a mission to discover who attacked Ian in the Queeen Vic.

When Max quizzes Sharon, she tells him he’s only trying to prove Tina’s innocence to get Linda back.

However, things really kick off when Bobby and Kathy Beale arrive to put missing flyers out for Ian.

Max exposed Sharon in the pub

Kathy says to Sharon: “I’m just going to put a couple of these up in here, if that’s okay.

“I mean, we’ve all got to do what we can, and any information we can get can only help us get him back. And that’s what we want, isn’t it?

“Unless, you’re happy for him to stay missing, so you can get your hands on his money and his pub.”

Sharon is flustered and says: “That is an awful thing to say.” Sharon was horrified that the truth was out

Kathy doesn’t back down and says: “Oh, so you want him back then. Go on, say it.”

Max then drops the bombshell – and the whole pub is left shocked.

Max says: “She ain’t got to say it. She wants him back. So she can finish him off. I mean that’s right isn’t it Sharon. It’s not Tina who tried to kill Ian. It was you.”

Viewers were shocked by the scenes, with one person saying: “Just watched #EastEnders on BBC iPlayer. Max has let the murderous cat out of the bag! How is Sharon going to sweet talk her way out of this one?!?”

Another added: “Sharon ain’t laughing now is she”

A third remarked: “Sharon is not even trying to act like she’s concerned about Ian. No wonder Max is onto her” Ian was then able to catch Sharon out when she went full steam ahead with her deadly dinner last week, telling her to eat some of the poisoned pasta herself.

A showdown ensued as Sharon forced Ian to admit to killing her son Dennis Mitchell.

I’m A Celebrity 2021: Danny Miller dropped over a cliff in horrifying Walk The...

Emmerdale spoilers: Mandy gets suspicious as Vinny takes on more hours at the scrapyard...

Nick Kyrgios confidently claims he would get a few subscribers on OnlyFans in hilarious...