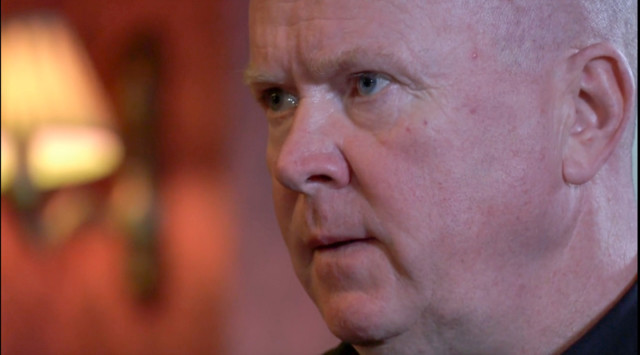 EASTENDERS fans spotted a perplexing blunder last night as Phil Mitchell paid a FIVER for an orange juice in the Queen Vic.

The Walford hardman – who is played by Steve McFadden in the BBC One soap – has teamed up with his ex Sharon to murder Ian Beale as revenge for their dead son Dennis.

But as Phil gave Sharon a bag of white powder to end Ian, he concealed it with a five pound note and asked her for an orange juice without change – and it left fans gobsmacked.

One wrote: “So you’re telling me phil mitchell paid a fiver for a glass of orange juice.”

Another added: “Blimey £5 for an orange juice, I mean I know its London East End but wow think Phil got ripped off not even ice offered!”

EastEnders fans were shocked by the price of the orange juice A third stunned fan said: “Did Phil really pay £5 for a glass of orange juice on eastenders? I know London prices are mad but that’s taking the p*ss.”

Sharon will organise a deadly dinner for Ian in scenes set to air later this week as she makes one final attempt to kill him with the drugs Phil has given her.

When Ian seems wary of her motives, Sharon convinces him she’s in love with him and talks about finally consummating their marriage. With Ian on board, viewers will then see Sharon getting ready for the dinner and looking through Denny’s possessions to spur her on.

But will her final murder attempt go to plan?

Sharon has been slowly poisoning Ian since Christmas Day, when it was revealed she knew all about his part in Denny’s death on the boat.

Max Branning recently attempted to expose Sharon’s sinister murder plans to Ian after noticing how ill he looked, but it went in one ear and out the other.

EastEnders spoilers: Janine Butcher schemes to get the Queen Vic with the Carters away

I’m A Celebrity should be CANCELLED say fans who beg bosses to shut down...